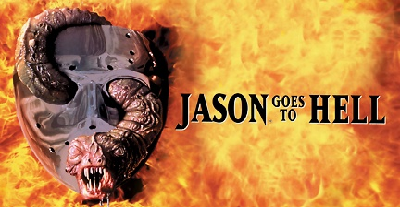 Undercover FBI agent Elizabeth Marcus, staying at a rundown cabin on Crystal Lake, encounters Jason and leads him to a clearing in the woods where he is attacked and blown to pieces by a government task force. As the agents celebrate the victory, a mysterious person in the forest, bounty hunter Creighton Duke, surveys what the government has just done and says "I don't think so", pointing out that Jason has not been defeated as it may seem.
Jason's remains are sent to a morgue. The coroner is processing the autopsy making various notes, including the heart being twice the size of a normal human heart. As he brings a scalpel to the heart, it begins to beat slowly, then faster and faster. The coroner becomes hypnotized by Jason's beating heart and is compelled to eat it. This causes spirits to emanate from Jason's remaining body parts, and the coroner becomes possessed by the "spirit" of Jason, as the reflection of the newly hosted coroner is that of Jason's original form. The now possessed coroner begins a killing spree en route to Crystal Lake. Along the way he kills hospital guards (one being actor Kane Hodder, who portrays the masked Jason in this and the previous two films), along with several teenagers.
The major plot line within the movie is that Jason's spirit must move to new hosts, due to the bodies it infests dying from decaying tissue, and being damaged by gunfire, etc. This transfer happens by the host body regurgitating a creature from its mouth and into the new host.
Jason makes his way to Diana's house. He now possesses the body of Josh Brennan. Steven attempts to protect her, but Diana is killed and Jason escapes. Steven is falsely accused and arrested for Diana's murder, and meets Creighton Duke in prison. Duke reveals Jessica's relation to Jason by asking Steven to "pay" for the information regarding the bloodline. He claims that only members of Jason's bloodline can truly kill him for good: "Through a Voorhees was he born, through a Voorhees may he be reborn, and only by the hand of a Voorhees may he die." Therefore if he transfers the creature into a member of his family, he will be "reborn" back to his old form. The only living relatives of Jason are his half-sister Diana Kimble, her daughter Jessica, and her infant daughter Stephanie.
Steven goes to the Voorhees house to find evidence to convince Jessica of his innocence and Jason's existence, but falls through rotten floorboards. Unscrupulous news anchor Robert Campbell, who is dating Jessica, enters and reveals on a phone call that he stole Diana's body and planted it in the house to have it revealed during an upcoming investigative show to boost his ratings. Jason bursts in and possesses Robert before leaving with Steven in pursuit. Jessica, who is unaware that her boyfriend is the undead killer, is attacked by him so he can be reborn through her but is disrupted by Steven, who manages to stop him and get Jessica into a car. He runs over Jason and explains the situation, but Jessica does not believe him and throws him out of the car and goes to the police.
Steven turns himself into police and arrives at the station as Jason does; he frees himself again to protect Jessica, who now realizes that Duke was telling the truth. In the chaos, Duke makes his escape. The two make their way to the diner where Diana worked and where baby Stephanie is. As they do, Jason arrives and a violent melee ensues leaving much of the staff dead and Jason presumably so. Jessica and Steven discover a note from Duke, telling them that he has the baby and ordering Jessica to meet him at the Voorhees house alone.
Jessica meets Duke at the Voorhees house. Duke throws her a knife, and when she catches it, the knife turns into a mystical dagger which can be used to permanently kill Jason. Meanwhile, Steven's friend Randy, a police officer, is attacked by Robert at the diner. Back at the house, Duke falls through the floor, and Jessica is confronted by two police officers. Sheriff Landis is killed accidentally with the dagger, and Jessica drops it under a dresser. Randy is revealed to be Jason, who tries to possess Stephanie, but Steven arrives and severs his neck with a machete. The creature crawls out of Randy's neck, and makes its way to the basement, where Diana's body was planted and crawls in her vagina. As Steven, Jessica, and Duke realize what is happening (that Jason can be reborn from any Voorhees relative, alive or dead), Jason explodes through the floor in his classic form.
As Jessica attempts to retrieve the dagger, the two men alternately fight with Jason. Duke is killed when Jason snaps his back in a bear hug, and the fight between Jason and Steven ends up outside in the yard. As Jason prepares to kill Steven, Jessica jumps behind him and stabs him in the chest. This releases the tortured souls of Jason's victims into Heaven as light is shined upon him. Large rock hands suddenly burst out of the ground, dragging Jason to Hell.
The next morning Steven and Jessica walk off into the sunrise with their baby. After they depart, a dog unearths Jason's mask before running away. Shortly after, Freddy Krueger's clawed glove bursts out of the ground and drags the mask under as he laughs, setting up the events of Freddy vs. Jason.