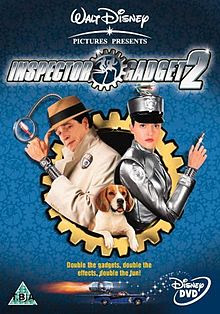 Description : One year after the events of the first film, the evil genius, Dr. Claw (Tony Martin), escapes from Riverton Prison, Chief Quimby (Mark Mitchell), Mayor Wilson (Sigrid Thornton) and Baxter (Bruce Spence) unveil a new upgraded female Gadget-type android Gadget Model #2 (G2 for short) (Elaine Hendrix), to replace the now malfunctioning Gadget (French Stewart) believing that he won't succeed with his glitches. Gadget soon falls for G2, but G2 turns down his offer to join forces, saying she works alone, having Quimby to tell Gadget to step down from his job and go back to patrolling the roads for speeders. However when Gadget does so he infuriates Chief Quimby for arresting his mother for going 25.3 miles per hour above the speed limit but most importantly for driving without a license; and charging it as "Drag Racing." Gadget is told to release Quimby's mother but when Quimby finally interprets the crime well he reluctantly fines her some money and puts Gadget on probation.

Meanwhile, Dr. Claw has fled to a deserted Bowling Factory headquarters with new henchmen he released from prison, Brick and McKibble. Dr. Claw plans to steal 5 trillion dollars worth of gold from the Federal Reserve in Riverton and stalling the city from the crime with a weapon.

Gadget's niece, Penny (Caitlin Wachs) points out a job ad in the papers for minions of Claw. Gadget goes undercover to the bar specified in the ad in an attempt to find Claw dressed as a hooligan so he can have his job back, but instead ends up causing a bar brawl, which G2 later breaks up the fight. Penny, wanting to prove to Gadget her ability as a detective, also goes to the bar with Brain, and finds out that Claw is planning a heist at the Concentrated Industries warehouse and tells Gadget and G2. Despite being warned by Quimby that he will be fired if he goes whithin 100 yards of G2's stakeout, Gadget goes, and in attempt to help G2, sabotages G2's stakeout allowing Claw's minions to escape with stolen ion fuel cells. Quimby does not fire Gadget as promised but instead punishes Gadget by making him spend his next 3 days in his job as a bathroom janitor.

Later, Gadget attends a science convention, after receiving a tipoff that he can catch Claw there. While there, some of Claw's henchmen disguised as fanguys plant a circuit override chip on Gadget's hat, allowing Claw to control Gadget. Claw has him use his gadgets to cause chaos, ruining the science convention, and his henchmen use the resulting distraction to steal a protoid laser. This is witnessed by Penny and Brain, who although unable to stop the theft, obtain a bowling shoe from one of the henchmen. Despite that Gadget has enough evidence from scientists to prove that it was not his fault, Quimby fires Gadget for failing to stop Claw and causing $100,000 in damages at the science convention, but Gadget says he quits instead because it wasn't his fault. So Gadget tries to find a new job as a construction worker, a hair stylist and a pizza chef, but he gets fired for having his gadgets keep wrecking everything due to his glitches, meanwhile, Claw and his henchmen are now free to steal anything whatever they want without Gadget stopping them.

Later, while Gadget is searching for a new job with a newspaper, Penny shows Gadget the bowling shoe after she investigated it while she was at the science convention searching for clues and offers to help him catch Claw, but Gadget refuses to both continue pursuing Claw and let Penny continue working on the case before adding that he has a surprise new job due to not being a crime fighter anymore. Penny sees this as him not believing in her, but soon resolves to solve the case herself along with Brain. A few days later, the Mayor, Quimby and G2 enter the fundraiser and Claw steals a 20 pound ruby on loan from the Rajah of India at the Mayor's Fundraiser by distracting the guests with laughing gas. However, G2 avoids the laughing gas effect and tries to catch Claw, but G2 fails at trying to catch Claw when she is restrained by a giant magnet bought along by Claw, so the Mayor demands Chief Quimby to deactivate her because of the failure, end the Gadget program for police, go back to regular police work and also tells him that G2 must be recycled at the dump immediately. Gadget (now working as a valet at the fundraiser venue) tries to comfort her, but she tells him there is nothing he can do.

Meanwhile, Penny and Brain break into the abandoned factory Claw is using as his hideout, having traced the shoe's origins to it. Claw and his minions soon return to their hideout following the theft of the ruby. While hiding, Penny and Brain overhear Claw's plan and try to escape, but Penny is captured while Brain is able to escape. Brain finds Gadget, who has just reactivated G2, and they use an experimental dog translator collar created by Baxter to allow Brain to tell them of Penny's predicament and Claw's plan. Gadget realizes that his niece was right about the bowling shoe from Claw's henchmen, but he refused to listen to her earlier due to being fired by Quimby for ruining the science convention. Gadget tells G2 that Penny is in trouble and G2 decides to help Gadget save Penny, so Gadget puts back on his signature Trenchcoat and hat, and they enter the Gadget Mobile to find Claw. Dr. Claw and his gang of thugs later activates his secret weapon: a laser made up of the three stolen components that if combined, freezes time in Riverton, allowing them to rob the Federal Reserve with ease. Gadget and G2 however avoid the weapon blast and hurry to the Federal Reserve where they catch Claw and his thugs filling their vehicles with the money.

Dr. Claw, Brick, and McKibble escape with Penny and Claw orders his other minions to hold them off. G2 and Gadget switch chips in order to help Gadget end his glitches and despite not being perfect in action G2 managed to trap half of Claw's gang with her new glitches. Meanwhile Gadget uses his helicopter hat to fly after Dr. Claw but Claw fires shots at him from cannons resulting in Gadget landing into trees and damaging his helicopter hat. Gadget then follows Claw with an electric scooter mechanic and manages to jump onto the roof of Claw's vehicle. However Claw expects this and drops Penny in a go-kart filled with bombs and her chained up to it to stall Gadget. Gadget saves Penny in time seconds before the bombs explode. G2 arrives with the Gadgetmobile and they arrive on a bridge where Claw is fleeing at. However Gadget is able to use his bubble-gum gun to stop Claw's vehicle and trap him and his thugs. The rest of Claw's gang tries to escape but they end up trapped in the smear of bubble-gum and arrested for their crimes. Dr. Claw not willing to give up, flees in a rocket vowing to be back "Next time."

Gadget, G2, and Penny find the laser and reverse the effects of Claw's secret weapon by using the password "crime always pays", thanks to Penny's thinking. The mayor and Quimby award the team for their heroism, and Quimby decides to continue the Gadget Program to form an army of more Gadget Models to have more strength of capturing Dr. Claw when he returns. Also Quimby is ordered to have Gadget and G2 on the case together for their heroism. Gadget then gave a junior inspector gadget medal to Penny for what she had done to help him. When heading to the Gadgetmobile and putting each other's hands together, Gadget and G2's hats malfunction with beeping hearts causing them to kiss, and causing fireworks to shoot out of Gadget's hat, showing how much they are in love with each other. The film ends with the Mayor and Quimby getting blasted by one of the fireworks, which causes the Chief and the Mayor to shout out "GADGET!!!"