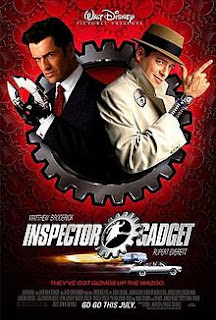 Description : John Brown (Matthew Broderick) works as a security guard at the laboratory run by robotics scientist Brenda Bradford (Joely Fisher) and her father Artemus in Riverton, Ohio. John wishes to join the Riverton Police Department, with support from his niece Penny. Brenda and Artemus create a lifelike robotic foot which they can control through thought as a prototype for the Gadget Program. However, tycoon Sanford Scolex (Rupert Everett) attacks the lab, kills Artemus and steals the foot in his plan to replicate the technology, create an army of machines and eventually conquer the world. John chases Scolex but his Chevrolet Chevette is turned upside down due to some oil slick from the tycoon's limo, SCOLEX 1. This also causes a Yahoo! billboard to fall on top of SCOLEX 1. Scolex mockingly throws a "victory cigar" (dynamite in disguise) right beside John's car, causing it to blow up, and leaving Brown barely alive with extensive tissue damage. However, the explosion causes a bowling ball from the car to fly up in the air and crush Scolex's left hand. Brenda decides to turn John into a completely cybernetic man using a computer chip which powers John’s in-built gadgetry.

Meanwhile, Scolex's paranoid assistant Kramer builds a robotic claw to replace his boss' hand. He tries to move a robot with the stolen equipment, but this fails. When chief henchman Sykes calls it a lemon, Scolex has him try it on as well, but this fails as well (frying Sykes) and Scolex concludes that he needs Brenda's help.

John, now with the name of “Inspector Gadget”, joins the police much to the irritation of Chief Quimby. He is also accompanied by his talking, intelligent car, the "Gadgetmobile", and is forced to do community service assignments when wanting to investigate the Bradford case. Gadget is diappointed with his mediocre work and decides to take up the Bradford case in secret and with help from Penny and Gadgetmobile. Scolex, meanwhile, completes an evil replica of the inspector* named RoboGadget and powers him with a chip similar to Gadget's own chip, and then sends him out to terrorize the city. Gadget realizes Scolex may be endangering Brenda after establishing a connection to some evidence from the crime (the letters "S.I" matched the initials on a truck labeled "Scolex Industries). Brenda learns from RoboBrenda (an idiot duplicate also sent to replace her) that Scolex murdered her father. Gadget sneaks into Scolex's lair but is captured. Scolex "kills" Gadget by removing and crushing his computer chip, before dumping him in the junkyard.

RoboGadget goes on a rampage across the city, whilst Brenda, Penny, her dog Brain and Gadgetmobile come across Gadget in the junkyard. Brenda manages to revive Gadget by kissing him, proving that although mechanical, he still has a human heart. The group rushes to Riverton to stop Scolex and RoboGadget. John confronts RoboGadget and they battle across a bridge until John pulls a cord on his counterpart’s neck, causing his head to fall off which the inspector throws into the nearby river, whilst RoboGadget’s body runs off.

Later, Brenda is taken captive by Scolex who attempts to make his escape in a helicopter. Gadget appears using his helicopter hat, but is shot down and suspended from the landing gear of Scolex’s helicopter above the city. Gadget launches a pen into the helicopter's cockpit and hits the shutdown button on Scolex's claw, crushing the controls. Gadget and Brenda escape, using an umbrella to sail safely to the ground. Claw follows but is caught by the Gadget mobile. The police arrive and although they think Gadget is responsible for the recent attacks, Penny appears with Sykes who hands over the robotic foot to Chief Quimby, and they both say Scolex created RoboGadget to terrorize Riverton. As Gadget and Brenda walk away, Scolex yells out, "Arrivederci, Gadget! This is not goodbye. I'll get you next time, Gadget! I'll get you!". At the end, Gadget launches fireworks from his right foot while Gadget mobile chases a red Volkswagen.

During the closing credits, RoboBrenda is shown teaching "robo-aerobics", RoboGadget is running around town still without his head, Sykes is being congratulated at a minion-recovery group, Penny is now equipped with a watch trying to make contact with Brain (when Brain responds, he uses Don Adam's voice), and finally, the Gadgetmobile's computer screen thanks us for watching his movie, even though it's called "Inspector Gadget". He says that he got married to the Volkswagen at a drive-through chapel and are expecting a small car soon. He's thinking of calling it "The Love Bug", which he says is in no way a plug for his employer, the Walt Disney Company, even though he's sure the young one will say, "I'm going to Disneyland!" when he's old enough. Lastly, he asks the audience not to leave the theater yet, as all the people in the credits make him look good. At the end of the credits, he asks the audience to leave the theater, and says "Good night, Riverton!"