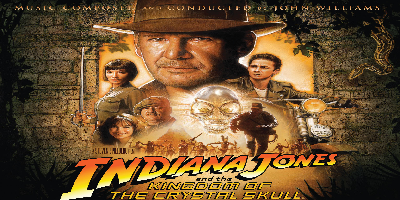 In 1957 during the Cold War, World War II veteran Indiana Jones and his partner George "Mac" McHale are kidnapped by a group of Soviet agents led by Colonel Dr. Irina Spalko. The Soviets infiltrate a warehouse labeled "Warehouse 51" in Nevada and force Jones to find a crate containing a corpse that was recovered from a crash ten years earlier near Roswell, New Mexico. After finding the crate, with its highly magnetic contents, Mac, bribed by the Soviets, double-crosses Jones. After a running battle with the Soviets, Indiana manages to escape on a rocket sled into the desert; he stumbles into a deserted town, part of a nuclear test site and survives a nuclear detonation by hiding in a lead-lined refrigerator. After the blast, Indiana Jones is found and arrested. He informs the government that the crate was stolen by the Soviets but is later debriefed by the Federal Bureau of Investigation, who believe he's also working for the Soviets like Mac, but Indiana is defended by an old friend who also worked with him in the army.
Shortly after returning to Marshall College, the FBI's investigation on Indiana proves him innocent, but the college becomes scared of it and Jones is offered an indefinite leave of absence to avoid being fired because of the crisis.
At a train station, Jones is stopped by greaser Henry "Mutt" Williams, who tells him that his old colleague Harold Oxley was kidnapped after discovering a crystal skull in Peru. Jones tells Mutt about the legend of crystal skulls found in the mystical city of Akator and whoever returns the skull to the city would be given control over its supernatural powers. Mutt gives Jones a letter from his mother, who is also being held captive, containing a riddle written by Oxley in an ancient Native American language. Just then they are interrupted by two KGB agents who demand the letter be given to them. As they're being taken into custody, Mutt is able to start a fight inside a diner giving him and Indiana time to escape on Mutt's motorcycle. After a car chase through the city and some of the campus, Jones and Mutt are able to escape and the Soviets back off when they hear police sirens approaching. They then travel to the Nazca Lines in Peru by plane. There they discover that Oxley was in a psychiatric hospital, after suffering a mental breakdown from handling the skull, and was kidnapped from his cell by the Soviets. In Oxley's cell, they find clues that lead them to the grave of Francisco de Orellana, a Conquistador who went missing in the 16th century while searching for Akator. They discover the skull at the grave, with Jones reasoning that Oxley had hidden it there.
Shortly afterward, Jones and Mutt are captured by the Soviets and taken to their camp, where they find Oxley and Mutt's mother, who turns out to be Jones' old love Marion Ravenwood, who later reveals that Mutt is Jones' son, Henry Jones III. Spalko believes that the crystal skull belongs to an inter-dimensional alien life form and holds great psychic power, and proves her theory by showing that the corpse stolen from the warehouse has an identically shaped skull. She also believes that returning the skull to Akator will grant the Soviets the advantage of psychic warfare. Jones, Marion, Mutt and Oxley escape from the Soviets into the Amazon; however, they are recaptured after Jones and Marion fall into quicksand and Oxley fetches the Soviets to "help". While being taken through the rainforest to Akator the next day, Marion and Indy argue so much that their guard Dovchenko gags Marion. However, Jones and Mutt manage to overpower him, after Jones frees himself with Mutt's hidden knife. He ungags Marion, then Mutt frees her while Jones takes over the truck, leading to a jungle chase resulting in many losses of Soviet troops, then stopping in an area full of giant ants that kill a soldier and Dovchenko. The group escapes and makes it to the city, but only after evading the Soviets and negotiating three waterfalls in a duck boat and narrowly avoiding being killed by a tribe guarding the long-abandoned city. Mac, who again switched allegiances, claiming to be a double agent for the CIA, has been secretly leaving a trail of tracking beacons for the Soviets to follow.
Inside the central temple, they find artifacts from several ancient civilizations. Jones deduces that the Inter-dimensional beings were kindred spirits; they too were "archaeologists" studying the different cultures of Earth. The five enter a chamber containing the crystal skeletons of thirteen enthroned inter-dimensional beings seated in a circle, with one missing its skull. After the Soviets arrive, Spalko replaces the skull. The inter-dimensional beings communicate to the group through Oxley using an ancient dialect and promises to reward them with a "big gift"; Spalko demands to "know everything". (Indy is smart enough to decline the offer, however.) The skeletons grant her request and transfer their collective knowledge into her mind. At the same time they activate a portal to another dimension. Jones, Marion, Mutt and the now restored Oxley escape the temple, but Mac and the other Soviets are sucked into the portal. Meanwhile, the skeletons combine to form a single living being and the knowledge transfer overwhelms Spalko, causing her to disintegrate; her dust is then drawn into the portal. The survivors watch as the temple walls crumble, revealing a massive flying saucer slowly rising from the debris; it hovers for a second before disappearing into the "space between spaces".
Sometime later, Jones is reinstated at Marshall College and made an associate dean. He and Marion are then married in a church.