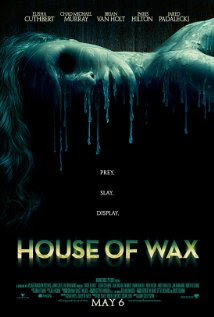 Description : In 1974, a woman is making a wax sculpture in the kitchen while her son eats breakfast in his highchair. Her husband enters with another son who is shouting and kicking. The boy is forced into a highchair and strapped in place. He scratches his mother's hand, causing her sculpture to fall to the floor.

In 2005, Carly (Elisha Cuthbert), her twin brother Nick (Chad Michael Murray), her boyfriend Wade (Jared Padalecki), her best friend Paige (Paris Hilton), Paige's boyfriend Blake (Robert Ri'chard) and Blake's friend Dalton (Jon Abrahams) are on their way to a highly anticipated football game in Louisiana. Night falls and the group decides to set up camp for the night. The campsite is later visited by a stranger in a pickup truck who shines his lights at the campsite, but refuses to leave or address them until Nick smashes a headlight with a bottle. The next morning, Wade find his car's fan belts to be damaged. Shortly after, they run into a disheveled, rural man named Lester (Damon Herriman), who offers to drive Wade and Carly to the nearby town of Ambrose to get a new fan belt, while the rest of them go to the football game.

The two arrive at Ambrose, which is virtually a ghost town. Unable to find an attendant at the auto mechanics shop, they wander into the church, disrupting a funeral. There, they meet a mechanic named Bo (Brian Van Holt), who offers to sell them a fan belt after the funeral. While waiting for the services to end, the two teens visit the wax museum, which itself is made of wax and is the central feature of the town. Afterward, they follow Bo to his house to find a proper fan belt. Wade follows Bo into his house, and gets stabbed by a mysterious figure (also played by Holt) in the dark. Outside, Carly learns that Bo's car is the same one that visited them the night before. She gets attacked by Bo and runs to the church, only to find that the ongoing funeral is populated only by wax sculptures. She is captured by Bo and imprisoned in a cellar, taped to a chair with her lips glued together. Meanwhile, Wade is incapacitated and brought to a room, where the figure straps him to a chair and sprays wax all over his naked body.

Due to standstill traffic, Blake, Paige, Nick and Dalton realize they were unable to make it to the game in time, and return to the campsite. Nick and Dalton offer to head to Ambrose to fetch Carly and Wade while Paige and Blake remain at the campsite. Some time later in the night, the figure visits the campsite; Blake is killed and Paige chased to a car factory, where she is ultimately skewered in the head with a broken pipe.

Back in Ambrose, also finding the town completely vacant, Dalton and Nick split up; Dalton heads to the wax museum, encounters the mysterious figure and is beheaded, whereas Nick finds and saves Carly. Soon after, they realize that the only inhabitants of the town are the sons of the wax museums proprietors, who have been trapping their victims for the creation of wax sculptures. The two owners, Bo and the mysterious figure Vincent Sinclair were Siamese twins separated at birth, leaving Vince horribly disfigured. Carly and Nick set fire in the building's basement to cut their attackers off. The fire spreads through the museum, slowly melting it down. They soon kill Bo and Vincent and escape from the wax museum as it melts to the ground, burying the two tragically disturbed brothers in their own work.

The next morning, the smoke from the fire has drawn help from outside and police and rescue workers sift through evidence throughout the town. The sheriff informs the group that the town has been abandoned for a decade, since its sugar mill closed down, and it doesn't even appear on maps anymore. Over the radio, police discuss the Sinclair's third son. The film closes and implies that Lester, who had driven the teens to the town earlier, is the third son.

Thanks for watching House of Wax (2005 English Film) Full Movie