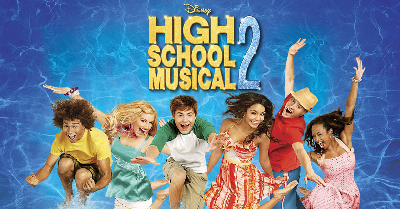 The Wildcats are back. They start off getting out of school, where Sharpay makes sure Troy has job at her country club. Troy then in returns gets everyone else a job at the country club too. Gabriella is the new lifeguard, while Troy, Chad, and the others work in the kitchen. At the country club there is a talent show, which Sharpay and Ryan win every year. Kelsi had written a song for Troy and Gabriella to sing at the talent show, which later on Sharpay takes (at a faster tempo) for her and Troy to sing at the talent show. Sharpay plots to take Troy away from Gabriella, by getting him a better job than the rest of the Wildcats. Troy starts changing, all for a "scholarship", starting to act like a jerk, which results in Gabriella breaking up with Troy, saying she doesn't belong there. After Troy loses all his friends, because he began acting like a jerk and had found out that Sharpay had made it where no Junior Staffers can perform in the talent show, he decides to do something about it, and asks for his old job back with the rest of his friends and quits the talent show leaving Sharpay with nothing, since she had ditched her brother to perform with Troy. She then goes back to Ryan, who had been working with the Junior Staffers on an act, who then leaves her saying she always wanted the spotlight, now she has it. Troy ends up doing the talent show, thinking that he would be performing with Sharpay. He learns a new song within a matter of minutes.