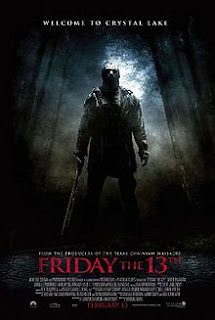 Description : On June 13, 1980, a young Jason Voorhees (Caleb Guss) witnesses his mother (Nana Visitor) being beheaded by a camp counselor (Stephanie Rhodes), who was trying to escape Mrs. Voorhees's murder spree around Camp Crystal Lake. Approximately 30 years later, a group of vacationing friends—Wade (Jonathan Sadowski), Richie (Ben Feldman), Mike (Nick Mennell), Whitney (Amanda Righetti) and Amanda (America Olivo)—arrive at Crystal Lake on a camping trip to find some marijuana that was planted in the woods. As Mike and Whitney explore the abandoned Crystal Lake camp, an adult Jason (Derek Mears), with a cloth wrapped around his face to conceal it, begins to kill the rest of the group one by one. Jason also kills Mike, but decides to spare Whitney and abducts her because she resembles his mother at a young age.

Six weeks later, Trent (Travis Van Winkle), along with his girlfriend Jenna (Danielle Panabaker) and their friends Chelsea (Willa Ford), Bree (Julianna Guill), Chewie (Aaron Yoo), Nolan (Ryan Hansen), and Lawrence (Arlen Escarpeta) arrive at Trent's summer cabin on the shore of Crystal Lake. The group is unaware of the events that occurred a few weeks prior. Clay Miller (Jared Padalecki) arrives in town to search Crystal Lake for Whitney, his sister. During a confrontation, a farmhand rips Jason's cloth mask so he replaces it with an early model goalie mask. Clay eventually makes his way to Trent's cabin, where Jenna agrees to help him look for his sister on the other side of the lake. As Clay and Jenna search for clues, Jason kills Chelsea and Nolan, who are wakeboarding on the lake. Clay and Jenna reach the old Crystal Lake campgrounds, where they witness Jason hauling a dead body into one of the abandoned camp houses.

The pair run back to warn the others about Jason, who soon arrives and cuts the power to the cabin. After killing Chewie and Lawrence, who ventured outside the house, Jason sneaks inside the cabin and kills Bree. Trent, Clay, and Jenna escape the house, but Trent is killed when he reaches the main road. Jason then chases Clay and Jenna back to the campgrounds, where Clay discovers Jason's lair and finds his sister chained to the wall. Clay frees Whitney, and all three attempt to escape as Jason arrives. The trio find an exit, but Jenna is killed before she can get out. Jason comes after Clay and Whitney, but Whitney, by pretending to be Mrs. Voorhees, uses Jason's love and memory of his mother to distract him long enough to stab him in the chest with his own machete. Afterward, Clay dumps Jason's lifeless body into the lake. Before he and Whitney can leave, Jason bursts through the wooden dock and grabs Whitney.


Thanks for watching Friday the 13th (2009 American Film) Full Movie