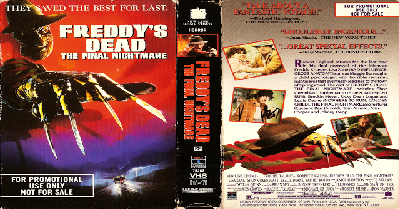 In 1999, ten years have passed since the fifth film; Freddy Krueger has managed to kill every child in Springwood, Ohio, though it is hinted that one child survived.
A young teenager seeking to escape Springwood is thrown from an airplane onto the street across from 1428 Elm, he races to escape but Krueger catches up with him and sends him flying through a hidden border of Springwood, causing him to strike his head. Krueger tells the boy to "be a good little dog and go fetch!" the boy wakens with no memory of who he is and wanders into the city with nothing but caffeine pills and a newspaper clipping of a missing woman; Loretta Krueger. He is picked up by police and taken to a youth shelter and comes under the care of Maggie Burroughs, a case worker for troubled teens; among those are Carlos, a sufferer of physical abuse who ended up with a hearing impairment, drug addict Spencer, whose privileged life is driven by his controlling father which drove him to rebelliousness. And Tracy, a troubled girl who was sexually abused by her father.
Maggie herself is troubled by recurring nightmares, which coincides with the news article the John Doe brings in with him and she suggests a trip to Springwood to spur his memories and shed light on her own mysteries. After a nightmare warning John to go back, he forces Maggie to stop abruptly, revealing that Carlos, Spencer and Tracy had stowed away to escape the shelter. After investigating the town, where the adult population has gone insane, Maggie orders the stowaways to return to the shelter while she and John go to the school. While they learn at the school that Freddy Krueger had a child that was taken away from him after the murders, the teens are unable to escape the town, being sent in circles by some unseen force. After they give up, they slip into a house that reveals itself as 1428 Elm. Carlos goes upstairs to get some sleep, he wakes up and finds himself in his old neighborhood where Freddy attacks him as his mother, then takes his hearing aid away. When he gives it back, it turns into a creature that amplifies all sound, and Freddy uses it to make Carlos' head explode. Suspicious by this, Tracy leaves Spencer in front of a television which only he can see. Despite Carlos' warnings, Spencer falls asleep.
Maggie and John go to the orphanage where the matron recognizes both John and Maggie confirming his suspicions he may be Freddy's child, but the matron playing with imaginary children and the fact she recognized Maggie as well makes her doubt his suspicions. Tracy gathers them and they go back to the house to help Carlos and Spencer who has now been drawn into a nightmare of a video game where his father is the antagonist. John and Tracy enter his dream to save him, but they are too late when he is sent into a pit which reflects in reality too. Unable to revive John, Tracy and Maggie try to escape town, but John is killed by being thrown onto a bed of spikes while Maggie and Tracy watch helplessly.
After returning to the shelter, Maggie's manager does not remember any of the teens that had died, but the shelter's dream specialist and Tracy's boxing coach Doc remembers them because he can control his dreams. Maggie remembers John's last words "it's not a boy" and finds that she had been adopted. Suspecting that she is Freddy's daughter, he confirms to her that he used her to travel to a new place to kill the children, choosing the shelter she works in. Tracy finds herself confronting her father, who she brutally beats to reveal Freddy and saves herself by putting her hands over an open stove to wake up. They see Doc who decides after his own encounter with Freddy that they can pull him out of the dream and into reality. Using a pair of 3-D Glasses (intended for the audience which this scene was released in 3-D in theaters). Maggie goes through the dream world and Freddy's memories to confront him and she drags him into the real world. After finding him, he appears human and begs for forgiveness, but he is revealed to have retained his supernatural powers and attacks Maggie who turns an artillery of weapons stored in the shelter and Freddy's own glove against him. When she finishes him off, she jabs a stick of dynamite into his chest and lights it. Freddy laments "Kids" before he explodes into thousands of pieces, and three demons that had been revealed to give him his powers cackle in delight and fly off. Maggie's glasses reappear, a sign that the world has returned to normal. She smiles smugly to Doc and Tracy before announcing "Freddy's dead."