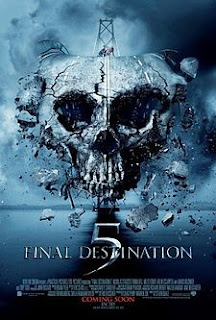 Description : Sam Lawton (Nicholas D'Agosto), is on his way to a company retreat with his friends. While their bus crosses the North Bay Bridge, Sam suffers a premonition that the bridge will partially collapse, killing everyone and himself. Panicked, he persuades his ex-girlfriend Molly Harper (Emma Bell), his friends Nathan Sears (Arlen Escarpeta) and Peter Friedkin (Miles Fisher), Peter's girlfriend Candice Hooper (Ellen Wroe), his boss Dennis Lapman (David Koechner), Candice's rival Olivia Castle (Jacqueline MacInnes Wood), and coworker Isaac Palmer (P.J. Byrne) to leave the bridge before it partially collapses. FBI agent Jim Block (Courtney B. Vance) doesn't believe that Sam was responsible for the bridge collapse, but promises to keep his eye on him. Following the memorial service, local coroner William Bludworth (Tony Todd) mysteriously warns the survivors that they cheated Death. Believing this to be just some nonsense, they ignore his warnings and move on.

Later, Candice and Peter go to gymnastics practice for Peter to watch her. A screw from the cooling fan above the gym loosens and falls onto the balance beam, resting sharp point up. One of the gymnasts practicing accidentally steps on the screw and hurts her foot. She falls off the beam and trips a bucket of white powder that falls in front of a fan. The fan blows the powder onto Candice and gets in her eyes while she is on the bars, and she flips off and snaps her spine, killing her and leaving Peter devastated. The next day, Isaac is decapitated to death when his head is crushed by a falling Budai statue during an acupuncture session at a Chinese spa. Bludworth, who appeared for both deaths so far, tells the remaining survivors that if they wish to cheat Death, they must kill someone who is not fated to die, and thereby claim their remaining lifespan.

The next day, Olivia goes to a laser eye surgery clinic to treat her myopic vision. In the middle of the procedure, the Doctor attending leaves the operating room to get some uncompleted files. A spilled glass of water shorts and disrupts the power that goes to the machine causing it to malfunction. The machine starts shooting overly powerful laser beams to Olivia burning her eye and hand. She manages to get off the surgery bed as Sam and Molly arrive to help her, but she trips on a toy eye and falls out the window onto a car. Later, after Sam and Molly study Death's design, they notice that Nathan is next on Death's list.

Meanwhile, Nathan, who has returned to the plant, accidentally kills his antagonistic co-worker Roy Carson (Brent Stait) during an argument by pushing him into the path of a lifting hook, impaling his head. Nathan relays this information to the remaining survivors, who suggest it may mean Nathan was successfully able to claim Roy's remaining lifespan and thus was skipped over. When Dennis arrives to question Nathan about the incident, he is suddenly killed when a stray wrench is launched by a belt sander, penetrating his head. That evening, Sam works at the restaurant, becoming very cautious as he moves around. After work, he asks his supervisor to reserve the restaurant for a date with Molly.

Peter, who has now become paranoid and insane by Candice's death, interrupts the date in order to inform them that he nearly pushed a stranger in front of a truck after convincing himself that he would be able to kill someone else in order to take their lifespan and thus has decided to kill Molly and take her remaining lifespan for himself. After Peter draws a gun and fires shots, Sam and Molly both escape to the restaurant's kitchen. Outside, Agent Block overhears the shots and enters the restaurant, arriving during the confrontation and being shot to death by Peter. Believing he is now safe from Death for taking Block's lifespan, he decides to kill both Molly and Sam to remove any witnesses. After some violent struggling, Peter is about to stab Molly with a kitchen knife, but Sam kills him by stabbing him in the back with a large rotisserie before he can harm Molly.

Two weeks later, Sam and Molly are boarding a plane to Paris, France. As they are taking their seats, a fight breaks out between two passengers, revealed to be Carter Horton and Alex Browning, resulting in their removal from the plane with the other passengers. The plane that Sam and Molly are boarding is revealed to be Volee Airlines Flight 180. In mid-air, before realizing they are too late to save themselves, Molly is ejected from the plane and bisected on the plane's wing and Sam is incinerated when the plane explodes. Meanwhile, at Roy's memorial, Nathan learns from a co-worker, John, that Roy's autopsy had revealed that he had a previously unknown brain aneurysm, and that doctors said he would be dead "any day now". As Nathan starts thinking that perhaps he had not saved himself, the landing gear from Flight 180 crashes through the roof of the building and crushes him, setting off the events of the first four films.