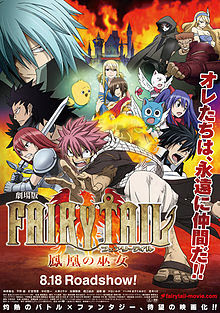 Description : The film follows Fairy Tail wizard guild members Lucy Heartfilia, Natsu Dragneel, Happy, Gray Fullbuster, Erza Scarlet, Wendy Marvell, and Carla after they fail a mission to catch a bandit gang leader. While returning home, Lucy encounters a priestess named Eclair and her birdlike companion Momon. Eclair collapses, and Lucy brings her to the Fairy Tail guildhall to recover. Hearing a premonition from Carla, Eclair leaves to enter the monster-filled Boundary Forest. Lucy and her friends offer to accompany Eclair to protect her. Eclair tells them of her aversion to wizards and magic, but reluctantly agrees.
Eclair tells Lucy and her friends that she has amnesia, and remembers she must bring the mystical Phoenix Stone in her possession to a wizard named Kalard living in Boundary Forest. They are attacked en route by Chase, a member of the dark guild Carbuncle hired by Prince Kriem, the ruler of the neighboring country Veronica, to obtain Eclair's stone. They eventually reach the remains of Kalard's house to find he is long dead. Through a holographic message, Kalard reveals himself to be Eclair's father and tells her of a spell he created to dispel the stone's cursed magic. Eclair warms herself to Fairy Tail and requests them to fulfill her father's last wish. Shortly after returning home, their guildhall is besieged by Carbuncle's leader Dist and his subordinates Chase, Cannon, and Coordinator, who kidnap Eclair and take her stone.
Fairy Tail's master Makarov Dreyar and fellow members Gajeel Redfox and Panther Lily arrive with news of Carbuncle's activity. The guild learns that there are two Phoenix Stones, one of which is in the possession of Kriem, who plans to combine the stones and summon a phoenix that will grant him immortality. Lucy, her friends, Gajeel, Lily, and Juvia Lockser go to Veronica to rescue Eclair, defeating Dist's subordinates there. Meanwhile, Kriem combines the two stones and tries to burn Eclair as a sacrifice. Momon frees Eclair and burns to death. As Kriem summons the phoenix, Dist throws him aside to attain immortality for himself. The "phoenix", revealed to be a giant, non-avian monster, begins destroying everything around it. Dist climbs on its back to obtain its immortality-granting blood. Natsu follows Dist and defeats him, but the phoenix continues to rampage.
Makarov arrives at Veronica with the rest of Fairy Tail, who begin attacking the phoenix. Makarov gives Erza the Arrow of Haja, a magic arrow created by Kalard and stolen from the Magic Council, to destroy the Phoenix Stone and the phoenix. Meanwhile, Eclair tells Lucy that she has regained her memories: she is immortal, having lived for 400 years after drinking the phoenix's blood to survive the raid on her village where Kriem's ancestors took one of the stones and formed Veronica. Makarov explains that destroying the Phoenix Stone will kill Eclair along with the phoenix. Despite Lucy's protests, Eclair accepts her fate. Erza fires the arrow into the phoenix's eye where the stone is located, with Natsu jamming the arrow further through until it pierces the stone. Eclair's body fades away with the phoenix, and her spirit reunites with Momon's as they ascend to the sky.
The film ends as Natsu consoles the grief-stricken Lucy over Eclair's death. A montage that plays during the closing credits shows the people of Veronica rebuilding their home, the Fairy Tail members repairing their guildhall, and Lucy smiling as she spots a young Eclair's spirit among the townsfolk.