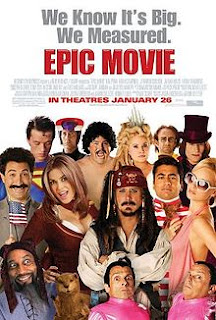 Description : The film begins with a parody of The Da Vinci Code. Lucy (Jayma Mays), finds that her adopted father (David Carradine), a museum curator, has been attacked by Silas (Kevin Hart). Before dying, he gives clues which lead her to a "Golden Ticket" in a vending machine candy bar. Edward (Kal Penn) lives at a Mexican monastery. Ignacio (Jareb Dauplaise) becomes enraged at Edward's displeasure at the living conditions and has him thrown out the window. On the way Edward grabs a Monk's "Golden Ticket". Next, the film introduces Susan (Faune Chambers). She is going to Namibia to meet her new adoptive parents. While she orders water, snakes come out and hijack the plane. Samuel L. Jackson (James Walker, Sr.) pops up and starts repeatedly saying "I have had it with these God damn snakes on this God damn plane!" and then throws Susan out of the plane so that she would be safe. Susan falls on Paris Hilton and finds her "Golden Ticket" in Paris' purse. Then the film introduces Peter (Adam Campbell), a mutant. He asks Mystique (Carmen Electra) to come with him to the homecoming dance. Peter is bullied by Mystique's boyfriend, Wolverine (Vince Vieluf), and the Headmaster, Magneto (Jim Piddock). As Magneto wills a locker door to open and knock Peter to the ground, another student's "Golden Ticket" falls onto Peter's chest.

All four meet up at Willy's Chocolate Factory. Willy (Crispin Glover) reveals he plans to use them all as the 'special ingredient' in the treats (which is actual human parts). In an effort to hide from the maniacal Willy, Lucy soon finds a wardrobe. On the other side, in the middle of a wintry forest, she finds Mr. Tumnus (Héctor Jiménez). He welcomes Lucy to Gnarnia. Feeling a burst of compassion, he manages to warn Lucy of the danger she is in. Edward follows Lucy to Gnarnia and meets the White Bitch (Jennifer Coolidge). She convinces him to trap the other orphans and he can be the king of Gnarnia in her White Castle. All four main characters makes his or her way to Mr. Tumnus' house, where the orphans discover that they are all related to one another, and that the White Bitch killed their parents. They ally themselves with Harry Beaver (Katt Williams), Tumnus' life partner. While this is occurring, Peter dreams that he is Superman, but in the dream he gets shot in the eye and falls off a building. Edward sneaks off to the White Bitch's castle. Despite realizing she intends evil, the White Bitch flashes Edward her breasts, hypnotizing him into giving up the information on the orphans; he is then imprisoned. The White Bitch sends Silas after the trio; Tumnus sacrifices himself to ensure their safety.

They end up meeting a graying Harry Potter (Kevin McDonald), along with a balding Ron Weasley (George Alvarez), and a pregnant Hermione Granger (Crista Flanagan) in Hogwarts. They all help Lucy, Susan, and Peter train for the war against the White Bitch. It's soon revealed she plans to create a new continent for her followers via a magic crystal; she acknowledges this is the same plot as Superman Returns. Edward escapes with the assistance of Captain Jack Swallows, only to find out later that it was a ruse as the Captain tricks needed intelligence out of Edward. Jack is then stabbed by the White Bitch as the crystal is lost in the ocean, putting the witch's plan in motion.

Upon finishing their training, Lucy, Susan, and Peter head to the camp of Aslo (Fred Willard). Aslo agrees to help Edward in exchange for a foursome and a Dutch oven. Managing to kill Silas while breaking Edward out, Aslo is slain by the White Bitch. Despite this, they have a pre-battle party, during which Peter and Mystique (who, along with the others who bullied Peter, had come to help the trio) make love. Susan gets drunk and vomits everywhere; this so disgusts their new army that nobody shows up to help the orphans the next day. Despite the presence of a revenge-craving Jack on a giant wooden wheel, the four siblings are easily dispatched. Peter is about to be slain when he finds the remote from the film Click (2006), using the device's reality altering powers to save his siblings; they kill the army and erase the White Bitch's plot. Although the others attempt to kill her while frozen, Peter declares the White Bitch will receive a fair and just trial in the new Gnarnia. Moments later, Jack's wheel crushes her. The four are crowned the new rulers of the land: Peter the Heroic; Susan the Just; Edward the Loyal; and Lucy the Dumbshit. Tumnus then shows up; he is still recovering from his battle with Silas. Decades later, the four now elderly rulers find the way home and stumble through. They appear moments after they had left, now young again. Borat congratulates them on a happy ending; the four are then smashed to death by Jack's wheel, with Borat following with "NOT!" before smacking his rump at the audience.