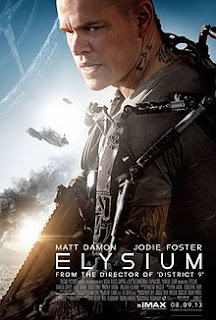 Description : In 2154, two classes of people exist: the very wealthy, who live on a luxurious space station called Elysium and the poor, who live on an overpopulated, devastated Earth. While residents on Earth are policed by ruthless robots, Elysian citizens live in comfort and regularly use man-sized medical devices called Med-Bays to keep them free of disease.

Max Da Costa (Matt Damon), a former car thief and parolee, lives in the ruins of Los Angeles and works at an assembly line for the Armadyne Corp., the company that built Elysium. But an accident at the plant exposes Max to a lethal dose of radiation, giving him only days to live. Meanwhile, when a caravan of illegal immigrants from Earth attempts to reach Elysium, Elysian Secretary of Defense Jessica Delacourt (Jodie Foster) orders vicious mercenary Kruger (Sharlto Copley) to shoot down the shuttles. Disapproving of her methods, Elysian President Patel (Faran Tahir) reprimands her. Delacourt, vowing to protect Elysium and her own power, bargains with Armadyne's CEO John Carlyle (William Fichtner) to write a program that can override Elysium's central computer and make her President. Carlyle creates the program in his office on Earth and uploads it to his brain for safekeeping.

Max, knowing his only chance for survival is a Med-Bay, seeks help from notorious smuggler Spider (Wagner Moura). Spider agrees to get Max to Elysium only if he helps him steal valuable financial information from Carlyle, who is preparing to leave Earth. With help, Max intercepts Carlyle's ship and uploads the data (including the program) to his own brain. However, Delacourt secretly deploys Kruger to rescue Carlyle and recover the program. In the ensuing firefight, Carlyle is mortally wounded and Max retreats to the house of Frey (Alice Braga), a childhood friend whose daughter, Matilda, has leukemia.

Afterwards, when Max returns to Spider to extract the information from his head, they discover Carlyle's program, realizing that they could make all of Earth's residents legal citizens of Elysium. However, the airspace lockdown Delecourt issued prevents Spider from launching a ship for Max. Instead, Max bargains with Kruger to be taken to Elysium, who unbeknownst to Max has captured Frey and Matilda as hostages. With the lockdown lifted, Kruger's ship departs for Elysium, but a scuffle ensues, causing the ship to crash land into Elysium. Max, Frey and Matilda are apprehended from the wreckage.

Delacourt chastises Kruger’s recklessness, but the mentally-unhinged Kruger kills Delacourt, planning to steal the program for himself to rule Elysium, and searches for Max, who escapes from his confinement and frees Frey and Matilda. Realizing that Med-Bays only work for Elysian citizens, Max resolves to use Carlyle's program to make everyone a citizen. He meets with Spider, who snuck aboard Elysium during the chaos, and head for the main control hub. However, they are ambushed by Kruger. During the fight, Max throws Kruger over a ledge to his death.

Spider and Max reach Elysium's main datacenter and Max activates the program, killing himself. As Max dies, the computer core is rebooted, registering every Earth resident as a citizen of Elysium. A Med-Bay cures Matilda, and as a massive number of new citizens on Earth are now recognized by Elysium's main computer as being in need of medical treatment, a fleet of medical ships are dispatched to Earth and begin their work.