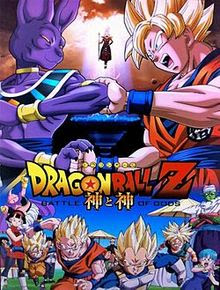 Description : Uis (ウイス Uisu?) wakes Birus, the God of Destruction (破壊神ビルス Hakaishin Birusu?), from his long slumber and tells him that Freeza was defeated by a Saiyan. Uis continues showing scenes of Goku's past, until Birus interrupts him and tells him he has seen enough. 39 years prior, the Oracle Fish foretold that a mighty opponent would appear before Birus, the Super Saiyan God. Birus, with Uis, then tracks down the warrior who defeated Freeza, Goku. On Kaiō-sama's planet, Birus proceeds to challenge Goku, who is ecstatic over the new challenge but ultimately becomes overwhelmed and defeated. Disappointed by the subsequent lack of challenge, Birus departs in order to seek out more powerful adversaries on Earth.
The God of Destruction's arrival interrupts Bulma's birthday party and it appears that Vegeta already knows Birus as he casts his pride aside in order to put Birus in a good mood. Pilaf, Mai, and Shu sneak into the party in order to steal the Dragon Balls, but are not recognized as they have been turned into children; before the events of the film, they gathered all the Dragon Balls themselves and wished for youth, but Shenlong made them a little too young. Discovering the three of them, Trunks mistakes Pilaf for a monkey and fibs to Goten that Mai is his girlfriend, which leads to the trio being brought in front of the partygoers. When Mai accidentally drops the Dragon Ball she stole, she takes Trunks hostage, but no one seems concerned. A drunk Gohan dares Mai to shoot him; he snaps all the bullets with one finger, but one of them hits Videl's leg and another one hits Birus' forehead. While healing her, Dende notices that Videl is pregnant. Videl has been hiding the fact to surprise Gohan later and they do not reveal it to the others yet. When Birus asks Mr. Boo for one or two of the custard puddings he has, Boo eats all of them, angering the God of Destruction who decides to destroy the Earth. Mr. Boo, Android 18, Tenshinhan and Piccolo attempt to fight Birus, but are easily defeated. Gohan powers up and attacks Birus only to be taken down by a heavy kick. Goten and Trunks fuse into Gotenks and attempt to fight Birus but are quickly defeated as well.
When the God of Destruction slaps Bulma, it angers Vegeta and he attacks. Goku appears, having been watching Vegeta's fight. Goku summons Shenlong to ask how to reach the Super Saiyan God. A Super Saiyan God once appeared on planet Vegeta to stop evil Saiyans, but he failed because of the form's time limit. The dragon also reveals that they need the power of six pure-hearted Saiyans for one of them to reach the Super Saiyan God form. Goku transforms into a Super Saiyan God, a form beyond even Super Saiyan 3, thanks to the power of himself, Vegeta, Gohan, Trunks, Goten, and Pan (from inside her mother Videl), fulfilling the prophecy once stated by the Oracle Fish. Goku confronts Birus again and they wage an intense battle in space, right above planet Earth. The form gives Goku the power to resist Birus, but he reverts to his regular Super Saiyan form due to the form's time limit. However, he learns the form's godlike feeling, which allows him to use Super Saiyan God's power against Birus. The two seem to be equally strong, but Birus eventually wins when he uses his strongest attack. Goku stops the energy sphere, barely holding it back, and the screen suddenly blacks out. Chi-Chi and Goku's friends appear in Goku's mind, then he absorbs the energy ball. Goku gets exhausted, and Birus wants Goku to say "I give up" and he says so. Birus stops the fight and they talk for a while before going back to the ground. Birus says that the Super Saiyan God was not that strong and the Oracle Fish's prediction was a little exaggerated. Birus reveals that Uis is his martial arts master and is even stronger than him. He also says that there are twelve universes and the one Goku and his friends know is just one of them, the Seventh Universe. Birus is the God of Destruction of the Seventh Universe, with each universe having its own God of Destruction. After returning to the temple, Uis knocks Birus out and remarks that Birus will wake up again in three years.