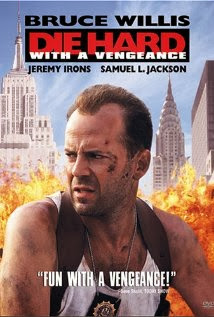 Description : In New York City, a bomb detonates destroying the Bonwit Teller department store. A man calling himself "Simon" phones Major Case Unit Inspector Walter Cobb of the New York City Police Department, claiming responsibility for the bomb. He demands that suspended police officer Lt. John McClane be dropped in Harlem wearing a sandwich board that says "I hate niggers". Harlem shop owner Zeus Carver spots McClane and tries to get him off the street before he is killed, but a gang of black youths attack the pair, who barely escape. Returning to the station, they learn that Simon is believed to have stolen several thousand gallons of an explosive compound. Simon calls again demanding McClane and Carver put themselves through a series of "games" to prevent more explosions.
McClane and Carver are instructed by Simon to travel to Wall Street station 90 blocks south, within 30 minutes to stop a bomb planted on a Brooklyn-bound 3 train. McClane succeeds in locating and throwing the bomb off the train but it detonates, causing the rear car of the train to derail, demolishing many of the station's support columns. U.S. Federal Bureau of Investigation agents tell McClane that Simon is Simon "Peter" Gruber, brother of Hans Gruber, whom McClane killed in the first film. During the debriefing, Simon calls again claiming that another bomb is planted in one of the city schools, and is sensitive to police radio signals. As McClane and Carver are forced to complete more riddles to identify the school, the police organize a citywide search of schools, and shut down the police radio band.
After overhearing a chance remark by a passerby, McClane realizes that he and Carver are being distracted to keep them away from Wall Street; Simon is planning a heist. Returning downtown, he finds Simon's men, disguised as cops, businessmen, construction workers and guards, have raided the Federal Reserve Bank of New York via the damaged subway station and made off with $140 billion of gold bullion in 14 stolen dump trucks.
After killing Simon's henchmen at the bank, McClane trails the dump trucks to an aqueduct in the New York City Water Tunnel No. 3 and captures one of the trucks. Simon destroys a cofferdam, flooding the tunnel; McClane is thrown clear and regroups with Carver. They continue to follow the dump trucks to a tanker, but are captured attempting to board. The police locate and attempt to evacuate the school they think the bomb is in. As the timer reaches zero, the police discover that the bomb is a decoy. McClane and Carver find that Simon has used the remaining explosive to rig the tanker to explode, which would send the gold to the bottom of the sea. Simon leaves the tanker, leaving McClane and Carver tied up next to the bomb, but they escape from the ship before it detonates.
As they regroup with the police and have their wounds treated, McClane theorizes that there was no gold on the ship, which ultimately proves correct as it was replaced with scrap metal, and Simon has likely escaped. While phoning to make amends with his estranged wife Holly, McClane realises an aspirin bottle given to him earlier by Simon gives an address in a border town of Quebec. McClane and Carver alongside the Royal Canadian Mounted Police raid the warehouse where Simon and his men are preparing to distribute the gold. Simon escapes in a helicopter, attempting to shoot McClane from the air, but McClane shoots a power line which hits the helicopter and destroys it, killing Simon. Carver joins McClane and convinces him to finish his call to his estranged wife Holly at a nearby pay phone.