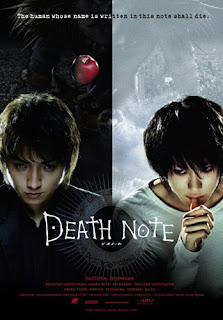 Description : The series is about Light Yagami, a young man and college student whose life undergoes a drastic change when he discovers a mysterious notebook, known as the "Death Note", lying on the ground. The Death Note's instructions claim that if a person's name is written within it while picturing that person's face, that person shall die. Light is initially skeptical of the notebook's authenticity, but after experimenting with it, he realizes that the Death Note is real. After meeting with the previous owner of the Death Note, a Shinigami named Ryuk, Light seeks to become "god of the new world" by passing his judgment on those he deems to be evil or who get in his way.

After months of killing criminals, Light is dubbed Kira by the public and some believe him to be righteous about killing criminals. Interpol is no closer to catching him, and is going to pass the case on to the Ministry of Health as some disease, until L steps onto the scene. Known as the best detective in the world, L has solved many cases with his assistant Watari. Working with them, L manages to confront Light, live on TV, and deduces he is in the Kanto region of Japan and he can "kill without lifting a finger." The race begins between L and Light to discover each other's identity, and a game of cat and mouse ensues between the two geniuses. Later Misora kidnaps Shiori and asks Light to come to the art museum and confess that he really is Kira if he wants to save her. He goes to the museum, but denies that he is Kira, and begs for Shiori's release. Misora tells Light that unless he kills her using her real name, which was "Naomi" written in katakana, she would kill Shiori. Light adamantly insists that he is not Kira. Soichiro, upon seeing this, sends the police. Misora immediately becomes upset and distracted, allowing Light's girlfriend to break free and run away from her. Misora fires her gun and shoots Shiori, who dies in Light's arms shortly afterward, and then afterwards commits suicide by shooting herself.

Later, Ryuk finds that Light had actually engineered Naomi's death using the Death Note, as he had already found out her name by checking with the church since she revealed to him she was Iwamatsu's fiancée and he reasoned that nobody would use a fake name in marriage and written a scenario whereby Misora would commit suicide after shooting Shiori. Obviously, Ryuk is confused, as by doing this, Light would end up killing Shiori, but Light reveals that he had written her name in the Death Note as well.

Using these events to foster hatred for Kira, Light asks to join the investigation team when his father checked on him. While Soichiro is slightly reluctant, L immediately grants his wish and it is hinted that he is still certain that Light is Kira.

As a prequel to the second movie, Misa, an actress, is chased down an alley by a man wielding a knife, intent on killing her. As she screams for help, the man dies of a heart attack just like Kira's victims. A second Death Note lands beside her.