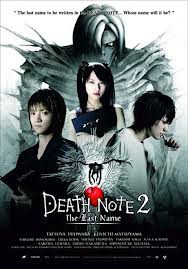 Description : The movie starts with Misa, a TV presenter, getting a 2nd Death Note.
Later Misa, using her Shinigami eyes, kills Mogi and two policemen. Sayu was also almost killed until her father Soichiro crashed into the festival wearing a motorcycle helmet. Light kills Takada to regain ownership of his Death Note. Afterwards Light tricks Rem into killing L and Watari. After they both die, Rem dies for intentionally killing someone to help Misa. Misa then gives up her ownership of the notebook and loses her memory of it.
Later it is revealed that L did not die and avoided death by writing his name in the notebook stating, "L Lawliet will die 23 days from this date". After proving that Light is Kira, Light pleads with Ryuk to kill L and the task force. Ryuk then agrees but writes Light's name in the Death Note, telling Light that anyone who uses the death note is banned from heaven and hell and will instead spend eternity as nothingness. Light dies in his father's arms begging him to believe he acted as Kira to carry out justice, which Soichiro had taught him since his childhood, into practice. Later Soichiro goes home and lies to his wife and daughter, saying that Light was killed by Kira. It ends 23 days later, with L dying peacefully.