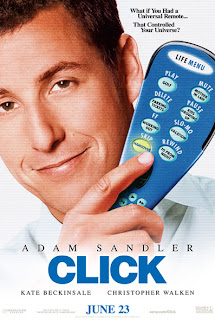 Description : Michael Newman (Adam Sandler) is an architect who is married to his longtime sweetheart, Donna (Kate Beckinsale) with two children, Ben and Samantha. Michael is easily pushed around by his overbearing boss, Mr. Ammer (David Hasselhoff). On numerous occasions, Michael willingly sacrifices time with his family to work so he can give them the kinds of possessions he never had. While going in search of a universal remote control at Bed Bath & Beyond, Michael falls onto a bed and then proceeds to the section marked "Beyond". There, he befriends a mysterious clerk named Morty (Christopher Walken), who gives him a "universal" remote control and warns that it can never be returned.
To Michael's amazement, he finds that the remote can control the actual universe, particularly time. Michael uses the remote to goof around at first, but then also to use it for his benefit such as interpret for foreign clientele or revisit events in his life such as family vacations or the first time he met Donna. However, Michael also uses it to skip fights with Donna, go forward until he rids himself of a cold, and skip a family dinner to work. Later, Morty reveals that when Michael fast-forwards through time, his body is on "auto-pilot" - his mind skips ahead, while his body goes through the motions of everyday life. After Mr. Ammer promises Michael a partnership, he decides to skip ahead to it, but ends up skipping a year of his life since it took him that long to actually get the promotion. Michael also finds out that he is in marriage counseling and missed the death of his dog. When the remote begins fast-forwarding without Michael controlling it, Morty warns the remote programs itself according to Michael's previous commands. Michael's various attempts to dispose of or destroy the remote fail, so he resolves to change his life so that the remote can't control him. The next day, Mr. Ammer tells Michael he is leaving the country, and in the course of the conversation Mr. Ammer suggests one day Michael may end up CEO. Without thinking, Michael responds to say he would like to end up CEO, the remote reacts accordingly and fast-forwards to 2017. Michael is now the CEO, but he is overweight, his daughter and son are 14 and 17 years old, he and Donna are divorced, and they all have a resentment to him. Michael also discovers that Donna is now dating Ben's childhood swim coach, Bill. Michael visits his old house and, after fighting with Donna, the new family dog pounces on him, and he falls and hits his head.
The remote having "learned" from Michael having skipped his cold, it transports him six years into the future in the year 2021, as he had not been healthy a single day over those six years: Donna recounts how a precautionary CAT scan after the fall revealed cancer, and how Michael ate so prolifically during chemotherapy as to subsequently suffer from a heart attack. In those six years, Michael is no longer obese thanks to liposuction, Donna has married Bill, and Ben has gone into his father's line of work. Michael is devastated when Ben tells him his father Ted died, and Michael, while visiting his father's tomb, tries to use the remote to go to when Ted was on his deathbed, but Morty shows up to say the remote only works for times and places where Michael had been present; Ted's final moments not being one of them. Michael instead uses the remote to take him to the point when he last saw Ted alive; which is revealed to be Ted making an impromptu visit to his son and grandson's office. While on auto-pilot, Michael brusquely rejected Ted's offer for a night out with him and Ben. During Michael's grief, Morty reveals he is in fact the Angel of Death. Upset with his life, Michael begs to go to a "good place", and fast forwards to Ben's wedding in 2031. There, he witnesses Samantha call Bill "Dad", and the shock triggers a second heart attack. When Michael awakens, Morty appears to tell him that he chose his path and he cannot do anything about it. Michael's family arrives and Ben reveals that he has cancelled his honeymoon in order to work on an important deal that will keep his business going. Shocked and not wanting Ben to make the same mistakes he did, Michael rushes after him. A nurse attempts to stop him, but Michael manages to jab the man with a sedative. He ignores Morty's repeated warnings that he will die unless he goes back to the hospital, saying he must get in his last words to his family. Michael reaches his family and collapses, but manages to convince Ben that family comes first; he reassures the rest that he still loves them and Morty comes up to take him.
There is a white flash, in which Michael wakes up in the present-day on the bed he collapsed onto at Bed Bath & Beyond after believing that the future events have all been a dream. A reformed Michael gives his business card to a man who claims he has no friends, offering to befriend him, then goes to his parents' house saying they are always welcome at his home, then Michael goes back to his private residence. At home, Michael reassures Donna, Ben, and Samantha of his affection for them and that he will never sacrifice them for work again. As he celebrates being home, Michael finds the remote and a note sitting on his kitchen counter, making Michael realize it was not a dream but in fact a warning. The note is from Morty saying that "good guys need a break" and that he knows Michael will do the right thing this time. Thanking Morty, Michael disposes of the remote in his trash bin, then goes to enjoy his wife and kids.