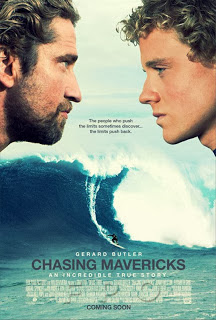 Description : As an 8-year-old boy in Santa Cruz, California, Jay Moriarity is saved from drowning by his next door neighbour, surfer Frosty Hesson (Gerard Butler). This ignites his passion for the sport.
One morning, Jay (Jonny Weston), now 16, sees Frosty leaving early one morning and hitches a ride on his van. He sees Frosty and three of his friends riding a gigantic swell known as Mavericks, which only occurs once every seven to ten years, and with El Niño coming in will be at its height in three months' time.
Reluctantly, Frosty agrees to teach Jay how to surf Mavericks, but he needs to learn about the "foundation pillars of surfing." These involve him learning to paddle board 36 miles from Santa Cruz to Monterey Bay, treading water for 40 minutes and being able to hold his breath for four minutes.
While training, Frosty also encourages him to write essays to focus on the task. His first essay is about Kim (Leven Rambin), his girlfriend, whose dog he saved when he was 8, which caused him to nearly drown. Jay gets closer to Kim as he trains, partially encouraged by Frosty's wife, Brenda (Abigail Spencer). A few weeks before the Mavericks biggest swell, Brenda has a stroke and dies.
Distraught a few days later, Frosty rides out into the bay and Jay goes after him. Using the knowledge he has acquired he helps Frosty back to shore and Frosty realises that Jay is ready to ride Mavericks. Frosty takes Jay to Mavericks at Half Moon Bay and, with his three friends, they watch him tread water against the tide and agree he is ready to ride with them.
For Jay's 16th birthday on June 15, 1994, his mother (Elisabeth Shue) gives him a radio so he can listen to the weather broadcasts to track the swell for Mavericks. Frosty gives him a custom-made gun (long board). Though Frosty had wanted to keep Mavericks a secret, Jay's notebook that he had been using for preparation ends up in the hands of his rival (Taylor Handley). When Jay and Frosty go to Half Moon Bay, there is a large crowd and boats taking surfers out.
Jay paddles out and many of the newcomers wipe out before getting to surf the Mavericks. Jay is wiped out at first, but then retrieves his board and successfully rides Mavericks. A title card reveals that he married Kim and died at age 22 while free-diving in the Maldives. The film ends with Frosty, Kim, and an assemblage of others holding a surfers' memorial service for Jay.