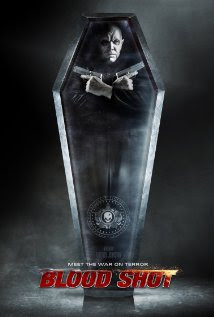 Description : In the heart of the city, a nefarious terrorist cell is plotting a major attack against the US. Little do the terrorists know, someone is on to them. As they prepare to execute the first part of their plan, a mysterious figure infiltrates their home base and dispatches them one by one. The mysterious figure is revealed to be a Vampire (Michael Bailey Smith), but not just any Vampire. This particular Vampire is employed by a covert government organization lead by Sam (Lance Henriksen) whose sole mission is to protect America from detrimental threats. Meanwhile, Rip (Brennan Elliott), a rogue cop, knows of the Vampire’s existence and will stop at nothing to destroy it, even if his wife, job, and sanity are at stake.

After several violent encounters with the Vampire, Rip is beaten to a pulp, but like any good cop, he never gives up. The Vampire attempts to explain himself to Rip and convince him that he is on the same side, but Rip isn’t having it.

In the meantime, Bob (Brad Dourif), the most notorious terrorist in the world, is on his way to the US to execute the attack. Along with him is a gang of motley terrorists (Marty Klebba, Joey Naber, Anthony Batarse, Herzl Tobey and Assaf Cohen), hell bent on destroying the city. Upon hearing the news, the Vampire must convince Rip to join forces and stop Bob before he detonates a powerful nuke in the middle of the city.