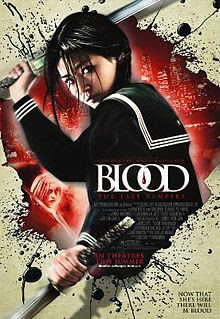 Description : A young woman on a train eyes a nervous man. In a flash, he is chased down the train and the young woman slices him in half. She is Saya (Gianna Jun), a four hundred year-old skilled half human-half vampire samurai who hunts vampires. Raised by a man named Kato (Yasuaki Kurata), she works loosely with an organization known as "The Council", a secret society that has been hunting vampires for centuries. Saya's motivation goes beyond duty; she wants revenge; Onigen (Koyuki), the oldest of the vampires, murdered her father. For her next mission, she goes undercover as a student at Kanto High School on an American air base near Tokyo, Japan.

When she is introduced in her class, Saya's appearance quickly attracts the negative attention of a female classmate, Sharon (Masiela Lusha). The daughter of the base's general, Alice McKee (Allison Miller), is also bothered with the attention. At her school, she finds herself being mocked. Alice is asked by her Kendo instructor Powell (Colin Salmon) to stay for the Kendo practice due to her poor performance. As soon as the teacher leaves, she finds herself at the mercy of Sharon and her sidekick friend who wield sharp bladed katanas to taunt and torment her. An elaborate fight sequence ensues. Saya shows up just in time to stop Sharon from slashing Alice’s throat. Despite Saya’s effort to disguise her activity, Alice sees Sharon and her friend being butchered. However it is soon revealed that Sharon and her friend are vampires in disguise.

Because "The Council" cleans up the bodies of the demons, Alice's father does not believe her story. Determined to make her own investigation, Alice goes to the bar where her Kendo instructor usually hangs out. To her horror her instructor, as well as the rest of the people in the bar, turn out to be vampires. Once again Saya comes to her rescue and has to fight off hordes of vampires surrounding them.

General McKee (Larry Lamb) investigates "The Council", who disguise themselves as CIA. Alice arrives just in time to witness her father’s death. Her dying father gives her Saya’s address. With nowhere else to go, Alice decides to seek Saya's help. Fortunately Saya has never sworn loyalty to "The Council" and protects Alice instead. The two of them flee the area and go off to the mountains to find and slay Onigen.

In their pursuit, Alice and Saya are run off the side of the road by an attacking demon and they fall into a ravine. When Alice and Saya awaken they are in Ancient Japan where Saya was raised. Onigen appears, reveals her true identity as Saya's mother, and fights Saya. Saya slays Onigen. Alice, who is injured during the fighting, wakes up to find herself at the wreckage of the truck and being carried into an ambulance. Later she is interviewed about the events surrounding her father's death, but her interviewer does not believe her story about the vampires or the Council. When asked about where Saya is, Alice answers that she is "searching for a way back from the other side of the looking glass."