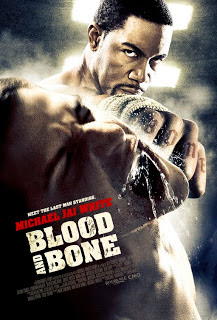 Description : Isaiah Bone (Michael Jai White) moves to Los Angeles, where underground fights are being held. One night, after watching a match involving local champion Hammerman (Bob Sapp), Bone makes a deal with promoter Pinball (Dante Basco) to get him into the fight scene for 20% of his earnings (40% if Pinball puts his own money on the line). On that same night, Bone encounters mob boss James (Eamonn Walker) and his girlfriend Angela Soto (Michelle Belegrin). It is revealed to Bone by Pinball that Angela was previously married, but James set her husband up on a triple-homicide, sending him to jail. When James learned that she was pregnant, he had her undergo an abortion. Since then, Angela has fallen into drug addiction.

Over the next few nights, Bone makes a name for himself in the underground fighting scene, defeating every fighter in his path and earning himself and Pinball thousands in cash. At the same time, he bonds with the people who live at his apartment building: Tamara (Nona Gaye) - the landlady who manages his apartment, Roberto (Dick Anthony Williams) - an elderly man whom he plays chess with, and Jared (Brody Lee and Cody Lee) - a young boy Tamara adopted after his father was sent to prison. Then, after making the once-undefeated Hammerman fall to the ground, Bone is offered a deal by James. The international underground fighting scene is run by a league of rich, powerful men known as the "Consortium", but mainly by a black market arms dealer named Franklin McVeigh (Julian Sands), and James wants Bone to square off against Pretty Boy Price (Matt Mullins), the reigning champion. Bone tells James he will think about the offer. Later in the party, James orders Angela to get acquainted with Bone in her room. Bone reveals to her that he was cell mates and close friends with her husband Danny (Kevin Phillips) in jail. Then one day, Danny was murdered by an inmate named JC (Kimbo Slice). Angela reveals that shortly after Danny went to prison, she gave birth to a son, but lost custody of him and does not know if he is still alive. Bone promises to bring her to her son, but sends her to a drug rehab clinic until she is ready.

The next morning, James offers McVeigh US$5 million to have him get the Consortium approve and schedule a fight between Bone and Price. That night, Bone discovers that Roberto has been murdered in front of the apartment, mauled to death by James' dogs because he witnessed one of James' street killings. Bone declines the offer to fight for James mainly because he never agreed to it; as a result, James orders his thugs to hunt down Bone and Pinball. James' bodyguard Teddy D (Ron Yuan) and his thugs head to the rehab clinic to pick up Angela, only to have Bone and Pinball dispatch them. Transmitting his location through Teddy D's GPS phone, James has the duo follow him to McVeigh's mansion. There, Bone is ordered by James to fight Price and win back his money, or else he will have Angela, Tamara, Jared and Pinball killed. During the conversation, Bone secretly records James' revelation that he had Danny set up and murdered through the GPS phone, which he transmits to Pinball's cell phone; Pinball then sends the video to the police. Bone faces Price, but at the point where he is close to defeating Price, he taps the ground and forfeits the fight. An infuriated James grabs his katana and attacks Bone, but Bone is thrown a jian by McVeigh's bodyguard to even the odds. Bone drops the sword and uses the sheath instead, beating James with it. In the middle of the melee, Bone blocks a sword slash, causing James to cut off his own hand. He runs off before the police arrive at the mansion to arrest James.

The next day, Angela is reunited with Jared. Tamara, who had threatened to kick Bone out due to his association with James, offers him to stay; he declines, saying he will only cause further trouble. Before exiting the apartment, he leaves her an envelope full of cash and asks her to take Angela in once she is rehabilitated. He also parts ways with Pinball, saying he has business to take care of.

During the end credits, James is attacked by JC and his gang in prison and sodomized.

Thanks for watching Blood and Bone (2009 American Film) Full Movie