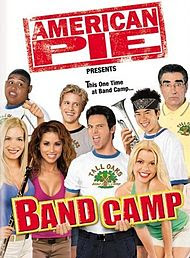 Upon arrival, Matt is extremely disrespectful to the rules along with everyone at Tall Oaks and even gets his school's band in trouble. Jim's dad, Noah Levenstein, the camp's MACRO (Morale And Conflict Resolution Officer) recommends he start trying to fit in and earn the band's trust. Matt conspires with his nerdy roommate, Ernie, to film the other band members in a bid called 'Bandeez Gone Wild', using hidden cameras.

During a lunch time scuffle Matt accepts a duel with rival band leader Brandon, wherein the performers show off their music skills, with Brandon playing the snare drum, and Matt playing the triangle. When it seems Matt has lost, he leaves the stage and comes back playing the bagpipes to the tune of "Play That Funky Music" to win the duel.

The various school bands compete for points throughout camp with East Great Falls leading on the last day, but an ill-fated prank by Matt that was intended for the rival team, causes the band to lose and East Great Falls band member Elyse to lose a chance at a scholarship. Once the new term starts, Matt attempts to fix his mistakes and persuades the school band to play Elyse's piece to the Conservatory head, winning Elyse a scholarship, and her affection.