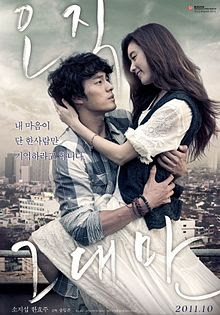 Description : Cheol-min, a man with a dark, mysterious past, gets hired at a part-time night job as a parking lot attendant. He sits in the tiny pay booth in the parking lot and stares at the small television. A woman named Jung-hwa walks into the booth. She offers something to Cheol-min and sits next to him. Cheol-min realizes the woman is blind and she is confusing him for the parking attendant who worked there previously.

Nevertheless, the woman comes back on another night to watch the same television drama. She constantly asks Cheol-min questions on what is happening on the television screen. Cheol-min starts becoming attached to the woman. Their past is tied by a life-altering incident.

One day, Cheol-min accompanies Jung-hwa to a musical. Afterwards they have dinner together. Jung-hwa asks about Cheol-min's past. Cheol-min ruthlessly berates Jung-hwa for asking about his past. Their relationship becomes strained.

Several days later when Jung-hwa's boss follows her home and tries to sexually assault her, Cheol-min busts through the door. He beats up Jung-hwa's boss savagely and attempts to comfort Jung-hwa. They move in together and start to live as a couple. But can their happiness last?