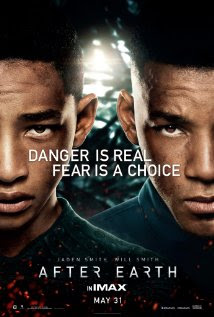 Description : In the near future, an environmental cataclysm forces the human race to abandon Earth and settle on a new world, Nova Prime.

One thousand years later, The Ranger Corps, a peacekeeping organization commanded by General Cypher Raige (Will Smith), comes into conflict with the S'krell, alien creatures who intended to conquer Nova Prime. Their secret weapons are the Ursas, large, blind predatory creatures that hunt by "sensing" fear. The Rangers struggle against the Ursas until Cypher learns how to completely suppress his fear, a technique called "ghosting". After teaching this technique to the other Rangers, he leads the Ranger Corps to victory. Meanwhile, Cypher's son Kitai Raige (Jaden Smith) blames himself for the death of his sister Senshi (Zoë Kravitz) at the hands of an Ursa. Kitai trains to become a Ranger like Cypher, but his application is rejected due to his recklessness, and Cypher views him as a disappointment. Kitai's mother Faia (Sophie Okonedo) convinces Cypher to take Kitai on his last voyage before retirement.

During flight, however, their spaceship is caught by an asteroid shower forcing them to crash-land on the now-quarantined Earth. Both of Cypher's legs are broken, and the main beacon for firing a distress signal is damaged. Cypher instructs Kitai to locate the tail section of the ship, which broke off on entry to the atmosphere. Inside is the backup beacon, which they can use to signal Nova Prime. Cypher gives Kitai his weapon, a wrist communicator, and six capsules of a fluid that enhances the oxygen intake so he can breathe in Earth's low-oxygen atmosphere. Cypher warns him to avoid the highly evolved fauna and flora, and be careful of violent thermal shifts. Kitai leaves to find the tail section, with Cypher guiding him through the communicator.

Kitai is attacked by giant baboons and, during his escape, is bitten by a poisonous leech. Kitai administers the antidote, but two of his capsules are damaged, and his nervous system shuts down. When Kitai awakens, he narrowly escapes a thermal shift. Kitai lies to Cypher, not informing him of the damaged capsules. That night, Kitai listens to Cypher tell him a story of when he was attacked by an Ursa, how he realized that fear is merely an illusion created by the mind's thoughts of the future, and thus he first began to "ghost" himself from the Ursas, choosing to live rather than to let his enemies, both fear and the Ursas, decide his fate.

The following day, Kitai reaches a mountaintop, and Cypher learns about the broken capsules. Knowing that the only way to make it with two capsules would be to skydive, Cypher orders Kitai to abort the mission. Believing his father still sees him as a disappointment, Kitai blames Senshi's death on Cypher's absence on the day of the attack. He skydives from the mountaintop, but is captured by a giant condor, and his communicator is damaged. Kitai wakes in a nest of the condor, where he is surrounded by huge saber cats attempting to get hold of the condor's chicks. Kitai and the condor fight the saber cats, and Kitai escapes. He reaches a river and builds a raft to continue along the river. Tired, Kitai falls asleep on the raft. He dreams of his sister, Senshi, who reassures him that Cypher's bitterness is just his own anger for not saving her. Senshi urges Kitai to wake up and when he does, he is surprised by another thermal shift and nearly freezes to death. Kitai is rescued by the condor, who sacrifices itself for him.

Kitai reaches the tail section and retrieves the emergency beacon along with another communicator, weapon, and more oxygen capsules. The communicator only allows Cypher to see and hear Kitai, but not for Kitai to hear him. Kitai learns that the ship's Ursa escaped and killed the remnants of the crew. The emergency beacon does not activate, and Cypher realizes that the atmosphere is blocking the signal. Kitai heads to a nearby volcano from which he can fire the beacon, and is injured when the Ursa attacks him. However, remembering Cypher's words, to focus on the moment rather than the outcome, Kitai is able to control his fear and "ghost" himself from the Ursa enough to kill it. He then fires the beacon. A rescue team arrives, and the two travel back to Nova Prime, both agreeing that they would rather work with Faia.


Thanks for watching After Earth (2013 English Film) Full Movie