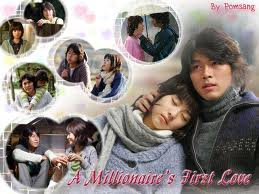 Description : Kang Jae-kyung (Hyun Bin) is your typical rich kid. He’s arrogant, drives sporty cars, attends the big clubs and rides through school corridors on his motorcycle. As his 18th birthday approaches he’s set to inherit his grandfather’s fortune, but first Jae-kyung is required to transfer to a new school in Gangwon Province and graduate. Until then all access to his penthouse, cottage and credit cards is denied. Should he fail to graduate or drop out then he loses everything. If he wishes to give up he'll only get 0.1% of his over-all inheritance. With little choice he heads out to the countryside and a small town in which daily life is far removed from what he’s used to.

Shortly after settling into his new home he meets 19 year-old Choi Eun-hwan (Lee Yeon-hee), who just happened to run into him back in Seoul. They don’t exactly hit it off; he’s far too stubborn and cool for school, while she sees hope for him and sets out to make him see it for himself. As they eventually draw closer, thanks to a set of coincidences and school projects they learn more about one another. Kang learns of Choi's terminal disease and does what he can to make her happy. He even tells his lawyer that he would give up his inheritance so he could buy the orphanage for her.

Once during the rehearsal of a play at the school, Kang Jae-kyung notices that the play is actually like the incident that had happened in his life. He recalls a childhood memory of being at the orphanage at Gangwondo, where he had met Eun-Whan and had made a promise to return in ten days. He went to find her and told her that he was unable to fulfill his promise and did not remember his promise or the girl because his parents had died in a car accident on that same day so he erased all his memories of the unfortunate past.

The day of the play came and Jae-kyung asked his classmate a favor to trade places, him as the Colonel rather than the maid. He went to Eun-whan's side and she asked him if he could put on the socks he bought earlier to her. While they were dancing, she felt a sudden pain and went backstage then returned much to Jae-kyung's worry. Eun-whan's mother came to watch the show.

Later, they celebrated the success of the play. The couple sat on the swing, Eun-whan told Jae-kyung "Sarang-hae" (Korean: "I love you.") and that she's sleepy, sleeping for 3 minutes. The first snow came.

On their graduation day, Choi Eun-whan received the Award of Friendship but didn't come as she never woke up, three minutes was over. A white bouquet of flower sat instead her seat next to Jae-kyung's chair. He stayed for a while and walked outside carrying the flowers. His grandpa's lawyer came, congratulated him and told him that the inheritance is his now as of that moment.

Jae-kyung built a house with many windows in memory of Eun-whan. He stated after the 50 first snows hit its windows, they will meet again.

Thanks for watching A Millionaire's First Love Full Movie