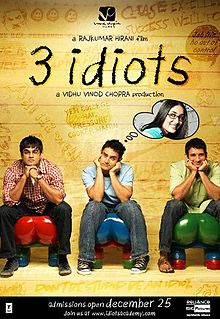 Description : Farhan Qureshi (R. Madhavan), Raju Rastogi (Sharman Joshi) and Ranchhordas Shyamaldas Chanchad (Aamir Khan) are three students who share a room in the residence of the fictional Imperial College of Engineering (ICE). Farhan is studying engineering to pursue his father's wishes, over his own passion for wildlife photography. Raju is studying to get his family out of poverty. On the other hand, Ranchho studies for his simple passion in machines. Rancho believes that one should follow excellence, not success, as success will take care of itself if excellence is followed.

However, this different approach is sneered upon by the college director, Dr. Viru "Virus" Sahastrabuddhe (Boman Irani). Virus's favourite student, Chatur Ramalingam (Omi Vaidya), known by the ICE community as "Silencer", believes in mindless memorizing over understanding in order to reach his goals of corporate status. Raju, who is initially annoyed by Rancho's methods, moves in with Chatur, where he fares worse. In order to impress Virus on Teachers' Day, Chatur, with the help of the college librarian, Dubey, writes a speech in pure Hindi which he will memorize to deliver on stage. Rancho decides to teach him a lesson and provide Raju with an example. Chatur, due his slow knowledge in Hindi, mindlessly memorizes the paper, of which Rancho had secretly changed a few words (e.g. "chamatkaar" (miracle/served) was changed to "balatkaar" (rape/screwed) and duhn (money/profit/funds/booty) to stuhn(breasts/bosom)). Chatur delivers this speech in front of Virus and the Education Minister, and becomes the ridicule subject of the night. Highly insulted and driven to vengeance, he swears retaliation and bets that he will become more successful with his methods than Rancho.

Meanwhile, Raju's paralyzed father goes into a cardiac arrest, and is saved in the nick of time by Rancho and Pia (Kareena Kapoor), Virus' daughter, a medical student who is doing residency in the city hospital. This makes Raju genuinely change his mind about Rancho and becomes his bosom friend along with Farhan. Rancho falls in love with Pia, and she reciprocates. Angered, Virus continually attempts to break Rancho's friendship with Farhan and Raju. However, they stick with Rancho always, who continuously comes first in every exam, while they are always last, barely passing, due to Farhan's photography passion, and since Raju is a scared man. Things further escalate four years later when the three friends drunkenly break into Virus's house one night, in order for Rancho to finally profess his love for Pia. Unfortunately Virus finds out about this and catches them in a classroom the next day. Virus threatens to rusticate Raju unless he pins the drunken incident on Rancho. Not wanting to betray his friend or let down his family, Raju attempts suicide and ends up in a coma. With two months of extensive care from his mother, Rancho, Farhan, and Pia, he makes a full recovery and thus discards his fear of the future, adopting Rancho's outlook. His frankness impresses the corporate agents during a job interview and they hire him. Farhan, goaded by his friends, convinces his parents to allow him to drop out of school and follow his wildlife photographer dream.

Furious, with his dignity and pride ruined as a result of Farhan managing well with his future and Raju getting a job, Virus schemes to set Raju an impossibly tough final exam, as the job offer is contingent on graduation. Pia learns of this and informs Rancho and Farhan, who break into Virus's office for the exam. However, Raju, with his new-found attitude, refuses to cheat and throws the paper away. Virus catches them, beats Rancho with his umbrella, and expels them on the spot. Pia angrily confronts him, revealing that her brother, whom their father had pushed to become an engineer despite his preference for literature, committed suicide after failing ICE's entrance exam three times. After revealing this secret, a sobbing Pia then flees to her hospital. Later that night, Pia's pregnant older sister Mona (Mona Singh) goes into labour. A heavy rainstorm cuts all power and floods the streets, making it impossible for an ambulance to take Mona to the hospital, or Pia to reach Mona. The students rig up a power supply and other equipment so that, with guidance from Rancho and Pia by webcam, they can deliver the baby. The baby is apparently stillborn, but kicks when the students all chant Rancho's calming mantra, "All is well". Thus, the baby is resuscitated. Virus finally reconciles with Rancho and his friends, allowing them to stay for their final exams, and giving Rancho an astronaut pen, a symbol of excellence that he has been keeping for thirty years to give to some exceptional student. But on the day of their graduation, when everyone else was busy with their friends and families, Rancho quietly slips out of the enjoying lot, and disappears from their lives.

This story is framed as intermittent flashbacks from the present day, ten years after Chatur vowed that he'd become more successful than Rancho. Chatur, who now boasts of his wealth and his bright career with an American company, is eager to rub it in Rancho's face. Raju and Farhan have tried to find Rancho for five years with no results. With Chatur's help, they travel to the Chhanchad estate in Shimla, where they find a completely different man: the real Ranchhoddas Chhanchad (Jaaved Jaffrey). Breaking in to the estate after the real Rancho's father's funeral service, they coerce him into revealing the truth. The real Rancho tells them that their friend was an orphaned servant boy called Chhote who loved learning, unlike the real him. After seeing Chhote's intelligence, Rancho's father arranged for the servant boy to go to college and earn a degree in Rancho's name with the real Rancho going to London for college too. After he reveals that he would pocket the qualifications and the benefits thereof while their friend would cut contact with the world to start a new life after earning a degree, he says that he is now a schoolteacher in Ladakh.

On the way, the three rescue Pia from an unhappy wedding, over Chatur's objections. He wants to get the trip finished quickly, because he is in a hurry to seal a business deal with Phunsukh Wangdu, a world-class scientist with hundreds of patents. In Ladakh, Raju and Farhan find villagers working with gadgets that show the stamp of Rancho/Chhote's ingenuity, and learn from an old acquaintance MM that their friend has all of Farhan's photography/research books, reads Raju's engineering blog every day, and kept Pia's helmet. The three friends reunite and Pia and Rancho/Chhote rekindle their love, while Chatur mocks his rival and makes him sign a "declaration of defeat". When Rancho/Chhote reveals his true name, Phunsukh Wangdu, a mortified Chatur accepts his own defeat and pleads with Phunsukh to forgive him and accept his company's contract. Phunsukh, Pia, Farhan and Raju run laughing into the distance as Chatur begs him to sign the contract and save Chatur's job.