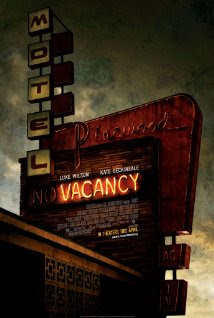 Description : A couple, David (Luke Wilson) and Amy Fox (Kate Beckinsale) take a wrong turn on a remote mountain road. When their car breaks down, they realize they are in a cell phone dead zone, with no reception. They then decide to check into a completely isolated motel in a rural area with a strangely off-putting manager called Mason (Frank Whaley).

While in their room, a bored David takes a peek at the video tapes left on top of the television. As he watches the tapes, he realizes they are snuff films, taken in the very room in which they are staying. The couple are alarmed by this as well as loud, insistent banging coming from the door to the adjacent room, and try to run away. Men dressed in blue and wearing masks stop them, and they return to their room. David makes a run to the motel's payphone booth to no avail, escaping it just before a car crashes into it. The couple decides to lock themselves in the room when they notice a truck pull in. They try to warn the truck driver only to find out that he is actually there to buy a box of tapes of the snuff films.

David and Amy escape into a tunnel that they discover in the bathroom of their room. They follow the tunnel and end up inside the manager's lair, where they find video monitors taping the entire motel. Amy tries to make a call to 911 but is interrupted before she can give the operator any useful information. The couple sneak back into the tunnel, and two of the masked people follow them in shortly after, but the couple evade them making their way into the auto garage across the lot from the motel. Meanwhile, the police unit responding to Amy's call arrives and David and Amy run to him as he checks the rooms. They all get inside the police car but it has been sabotaged and the killers murder the policeman while he looks under the hood.

The couple run into one of the other motel rooms. David hides Amy in a space inside the ceiling, while he ventures out. The killers catch and stab David and he ends up collapsing in the doorway. In the morning, Amy comes down from the ceiling and finds where the killers hid their car. As Amy drives away, a killer breaks into the car from the sun roof, and in her effort to fend him off while driving, Amy crashes the car into the motel, killing her attacker as well as another one of the masked men, revealed to be the gas station attendant that earlier "helped" the couple with their car troubles, who is crushed against the front of the car. She runs into the reception area where she finds a revolver. In an effort to reach the revolver, an apoplectic Mason strangles her with a telephone cord. As they fight, Mason beats her severely. But in his effort to get a good final shot with his hand-held digital video camera, Mason throws Amy within reach of a revolver she had dropped, and she shoots Mason three times. Amy immediately runs to David to find that he is still barely alive. She searches Mason's body carefully for the telephone cord he had pulled out of the wall to use to strangle her, calls 911 again and returns to comfort David while they wait for the police.