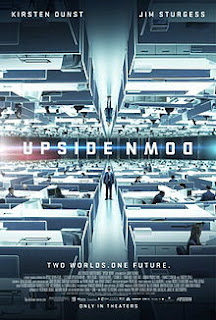 Description : The film starts with Adam telling the story of his planet, unique from other planets as it is the only one that has dual gravity. Two planets exist next to another. The gravity of the planets have 3 rules:

1. All matter is pulled by the gravity of the world that it comes from, and not the other.
2. An object's weight can be offset by matter from the opposite world (inverse matter).
3. After some time in contact, matter in contact with inverse matter burns.

The two worlds are separated. While the upper world (Up) is rich and prosperous, the lower (Down) is poor. Up buys cheap oil from Down and sells electricity back to Down at higher prices. Going Up or having contact with anyone from Up is strictly forbidden and can be punishable by incarceration or the death penalty. The only connection linking the two worlds is through the company "TransWorld", housed in a majestic building structure.

Adam lives in an orphanage in Down, having lost his parents in an oil refinery explosion. The only living relative he has is his great-aunt, whom he visits every week. His great-aunt has a secret recipe for flying pancakes using pollen from pink bees which gather pollen from both worlds. The recipe has passed through generations and will be inherited by Adam.

As a child, Adam secretly climbs a mountain that gets very close to Up. There he meets Eden, a girl from Up. Years later in their teens, they are in a relationship. They meet on the mountains and Adam uses a rope to pull Eden towards Down, and they head to the woods for a stroll. They are later discovered, and while Adam frantically releases Eden back to her world, he gets shot and drops her. Helpless, he watches Eden lying motionless on the ground as blood oozes from her head. When he returns home, his aunt is arrested and her home destroyed.

Ten years later, Adam is now working on creating an anti-gravity product using his great-aunt's recipe. The recipe allows matter to feel both gravitational fields at once. Adam is developing it as a cosmetic product for face-lifts. Then he sees Eden on TV and learns she is alive and works at TransWorld. He finally works out his formula and gets hired by TransWorld to develop the face-lift cream. Adam's plan is to find Eden in TransWorld. In his office he meets Bob, a TransWorld employee from Up becomes his friend after he helps him obtain rare stamps from Down. Bob offers to help him contact Eden.

With the help of Bob, Adam meets Eden by putting Up-material in his clothes to disguise himself as a worker from Up, using Bob's name as his own. But Eden doesn't recognize him, suffering from amnesia from the accident as a teen. The Up-material in Adam's clothes starts to burn so he has to return to Down. Later on, Bob is fired but as he leaves, he secretly gives Adam his ID to help him exit the TransWorld building and into Up. Later, by calling Eden through Bob's phone, Adam manages to get a date.

Meanwhile, his cosmetic cream becomes of great importance to the company. While Adam is doing a presentation of the cream, Eden sees him, shocked that he is from Down and learns his real name. Adam runs to find her but Bob's ID, having been terminated, lands him in trouble. He escapes to Bob's house. He shows him that by mixing the matter from both gravity areas can make matter that resists both gravitational fields and tells him he didn't give TransWorld the secret ingredient of his compound, leaving the company unable to produce the product without him.

With Bob's help, he goes back to the restaurant where he met with Eden before and finds out she started to remember him. But the cops come and he has to run. When he returns to his planet, he goes to the mountain top where he met Eden. Eden comes to find him and they meet as they used to. But cops find them again and, as they fail to escape, Eden is arrested while Adam drops. TransWorld agrees to drop the charges against Eden if Adam gives them his formula and never contacts Eden again.

Now Adam has gone back to his old life, believing he will never see Eden again. Eden goes to Bob for help. Bob finds Adam and surprises him by showing he can stay Down without the help of the weight supplements; Bob has been able to use Adam's methods to create a way to negate the effect of gravity. Bob tells him he had the patent of his beauty cream before TransWorld and tells him he has a date.

The film ends with Eden becoming pregnant with twins. Adam tells of their act and how it has changed their worlds forever, the two worlds now equalized in wealth and status.


Thanks for watching Upside Down (2012 English Film) Full Movie