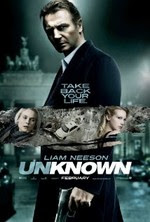 Description : Unknown is a 2011 French-German-British psychological thriller film directed by Jaume Collet-Serra, starring Liam Neeson, Diane Kruger, January Jones, Aidan Quinn, Bruno Ganz, and Frank Langella. The film is based on the 2003 French novel published in English as Out of My Head, by Didier Van Cauwelaert.

Dr. Martin Harris (Neeson) and his wife Liz (Jones) arrive in Berlin for a biotechnology summit. However, upon arriving at Hotel Adlon, Martin realizes his briefcase was left at the airport. He takes a taxicab driven by a woman named Gina, but on the way to the airport, the cab crashes off a bridge into the river, knocking Martin unconscious on impact. Gina saves him from drowning, then flees the scene to avoid police because she is an illegal immigrant from Bosnia & Herzegovina. On Thanksgiving day, Martin regains consciousness at the hospital after being in a coma for four days.

Martin returns to his hotel and discovers another man with his wife, who claims she doesn't know him. He attempts to contact his old colleague, Prof. Rodney Cole (Langella), but Cole is unavailable due to Thanksgiving in the US. Martin then heads to the office of Prof. Leo Bressler, whom he is scheduled to meet that day. However, he sees the impostor, "Martin B", already in a meeting with Bressler. As Martin attempts to prove his identity, Martin B shows him his ID and family photo—both of which have Martin's name with his face replaced by the impostor's. Overwhelmed by the identity crisis, Martin falls unconscious, then finds himself back at the hospital. Smith, an assassin sent to target Martin, kills Nurse Gretchen Erfurt, but Martin escapes. In a train, Martin tries to note down his schedule for the next day from memory.

Martin then seeks help from Nurse Erfurt's friend, private investigator and former Stasi agent Ernst Jürgen. Martin's only clues are his father's book on botany and Gina, who now works at a diner after being fired from the taxicab company since the crash. While Martin attempts to persuade Gina to help him, Jürgen digs up information related to Martin and the biotechnology summit. He discovers the summit will be attended by Prince Shada of Saudi Arabia, who is funding a secret project headed by Bressler. Prince Shada has survived numerous assassination attempts by extremists in his own country, and Jürgen suspects that Martin's identity theft may be part of another attempt to take the Prince's life.

Meanwhile, Smith and another assassin, Jones, attempt to eliminate Martin and Gina, but the couple escape after a fight at her apartment in which Gina kills Smith. Martin looks at his book and sees a set of numbers written by his spouse. The numbers correspond to words found on specific pages of the book, which appear as secret codes. Using his schedule, Martin knows Martin B's engagements and confronts Liz when alone, who tells him that he left his briefcase at the airport. Meanwhile, Jürgen receives Cole at his office and deduces that Cole used to be a member of a legendary secret squad of mercenaries known as "Section 15" and is a potent killer. Realizing Cole is there to kill him and he has no way of escaping, Jürgen commits suicide by drinking cyanide-laced coffee in order to protect Martin.

After retrieving his briefcase, Martin parts ways with Gina. She sees him kidnapped by Cole and Jones. She steals a taxicab and chases after Cole's van. Martin wakes up in a car park and is told by Cole that Martin Harris is a cover name and that he, Liz and Martin B are assassins sent to target the summit. Because he injured his head during the car crash, his memory was altered and he believed his fake Martin Harris persona was his own identity. Gina rushes in and stops Jones from killing Martin as Cole hides in the van. A brief fight between Jones and Gina ends when Gina drives her car into Jones and crushes him against the rear of Cole's van. Gina rams her car into the van and sends it plummeting out the car park with Cole still inside, killing him. Martin finds a hidden compartment in his briefcase containing two Canadian passports, and remembers that he and Liz were in Berlin three months prior to plant a bomb in the suite that is to be occupied by Prince Shada for the summit.

Now aware of his own role in the assassination plot, Martin seeks to redeem himself by thwarting the assassination and heads for the hotel with Gina. Security immediately arrests them, but Martin convinces them of his presence in the hotel three months earlier. He then realizes that Prince Shada is not the target, but Bressler, who has developed a genetically modified breed of corn capable of surviving harsh climates, easing the world's food supply problem. With Bressler's death and the theft of his research, billions of dollars would fall into the wrong hands.

Liz uses her own copy of the book's secret codes to remotely access Bressler's laptop and steal the data. After being convinced of a bomb, security evacuates the hotel. Seeing their assassination attempt has been foiled, Liz tries to disarm the bomb but cannot reach the deactivation button and is killed when a section of the Hôtel Adlon is blown up. Martin kills Martin B, the last remaining assassin, before the latter can murder Bressler. Bressler announces that he is giving his project to the world for free, while Martin and Gina board a train with new passports and identities.