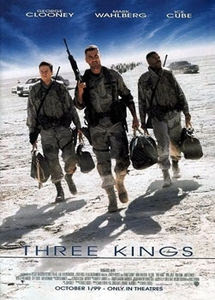 Description : Three Kings is a 1999 satirical war film written and directed by David O. Russell from a story by John Ridley about a gold heist that takes place during the 1991 Iraqi uprising against Saddam Hussein following the end of the Persian Gulf War. The film stars George Clooney, Mark Wahlberg, Ice Cube, and Spike Jonze.

Around the corner, Major Archie Gates (George Clooney), a U.S. Army Special Forces soldier, is trading sex for stories with a journalist, Cathy Daitch (Judy Greer) when he is interrupted by Adriana Cruz (Nora Dunn), the television reporter he is assigned to escort. They are all bored since the war has ended and Archie is lectured when he expresses frustration with the mission and his cushy assignment, but grudgingly agrees to go along for the time being.

The next day Troy and his unit disarm and search surrendering Iraqi soldiers, and while forcibly subduing a resisting Iraqi officer they find a document between his buttock cheeks. It appears to be a map, and Troy decides not to tell his commanding officer, instead asking Chief Elgin for help translating his "Iraqi ass map" as Vig looks on. Walter is guarding the tent when Major Gates appears, after tracking down a lead from Adriana. Archie convinces them that the document is a map of Saddam's bunkers, containing gold bullion stolen from Kuwait. They decide to steal the gold and set off the next day.

Using the ceasefire orders from President Bush, the Americans enter and secure the bunkers without any bloodshed. There, among other goods plundered from Kuwait, they find the gold, and stumble on the interrogation of an Iraqi rebel leader. As they are leaving the man's wife pleads with them not to abandon the anti-Saddam dissidents, but she is summarily shot by the Iraqi Republican Guard, and Archie decides they can't just "grab the gold and go." They free a group of Iraqi prisoners, including the dissident rebel leader, violating the ceasefire and triggering a firefight. They pull out just as Iraqi reinforcements arrive, and as they try to evade a CS gas attack, the Americans blunder into a minefield and get separated. Iraqi soldiers capture Troy while a group of rebels rescue the other Americans and take them to their underground hideout, retrieving the bags containing the gold as they go. There, Conrad, Chief and Archie agree to help the rebels and their families reach the Iranian border, after they rescue Troy.

Troy has been taken back to the bunker, and when he is thrown in a room full of Kuwaiti cell phones, he manages to call his wife back home and tells her to report his location to his local Army Reserve unit. His call is cut short when he is dragged to the same interrogation room where they found the rebel leader. While inflicting electric shocks on Troy and eventually forcing him to drink motor oil, Iraqi Captain Saïd (Saïd Taghmaoui) explains that he learned interrogation techniques from the Americans, berates Troy about the hypocrisy of American involvement in the region, and informs him that his son was killed during the American bombing of Baghdad.

The Americans with the rebels go to a band of Iraqi Army deserters, who are persuaded to sell them luxury cars stolen from Kuwait. The cars are outfitted as Saddam's entourage, in a ruse to scare away the bunker's defenders, pretending that an enraged Saddam is coming to kill them for losing the gold. After storming the bunker, they free Troy, who spares his torturer's life, as well as more Shi'ite dissidents held in a dungeon. But a few of the soldiers who ran away return, and Conrad and Troy are shot. Conrad dies but Troy survives with a punctured lung, requiring a flutter valve in his chest to relieve pressure so he can breathe until they reach a hospital.

Archie radios Walter, arranging transport and telling him to bring Adriana, while the hapless officers in the camp try to locate the trio after getting the message from Troy's wife. Each of the rebels is given a bar of gold and the rest is buried as they wait for the transport to arrive. The convoy goes to the Iranian border, where the three Americans will escort the rebels across to protect them from the Iraqi soldiers guarding the crossing. But the American officers arrive in helicopters and stop the group, arresting the trio while the rebels are recaptured. Archie, Troy and Chief nod to each other, and Archie proffers the buried gold to the American officers in exchange for letting the refugees through.

All of the soldiers are cleared of the charges thanks to Adriana's reporting. Archie and Chief go to work as military advisers to action films, and Troy returns to his wife and baby, running his own carpet store. The stolen gold was returned to Kuwait, although they claimed that some was missing - a reference to the gold spent and given away along the adventure.