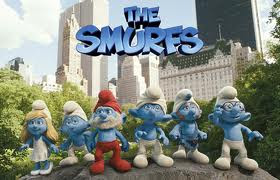 “The Smurfs” is so smurfing sweet that you’ll want to smurfing puke all over the smurfing place. I’m not going to make excuses, I knew exactly what I was getting myself into when I made the conscious decision to go see “The Smurfs”. Somehow I deluded myself into thinking that it might be fun, and even kind of subversive if handled right. After all, I loved the Smurfs as a child. I watched the cartoon, I had this sing-a-long record that I absolutely adored called “The Smurfs All-Star Show”, and I’m pretty sure that I had a Smurfs pillowcase. The point I’m trying to make is that I’ve had a special place in my heart for those little blue fuckers for most of my adolescent and adult life. Yeah, that’s gone now. Just poof, disappeared, vanished into thin air. Any residual nostalgia, any fond, lingering memories are just that, memories. Thanks a lot “Smurfs”, thank you for killing yet another treasured piece of my youth. I’ll bury that shit right next to “G.I. Joe”, “Transformers”, Santa Claus, and “Daredevil”. “The Smurfs” is exactly as bad as most of you, at least those of you out there capable of rational thought, expected it to be.

You know the basics. Smurfs, the brainchild of Belgian drug-user Peyo, are three apples high, inhabit a magical forest, and live in giant psychedelic mushroom houses. There are 99 dude Smurfs, and only one woman, which is creepy. All of them, except Smurfette, the lone lady, and Papa, the patriarch, are named after their dominant personality trait: Greedy Smurf, Vanity Smurf, Passive Aggressive Smurf (not making that one up), Incontinent Smurf (that one I did make up), you get the idea. They are hunted by a crazed, incompetent wizard named Gargamel, who wants to steal the Smurf’s “essence”, which will give him great power. In this story everything is peachy-keen in Smurf Village. Gargamel (played with over-the-top glee by Hank Azaria) is an idiot and easily fooled. But oh no, Papa Smurf (voiced by Jonathan Winters, who I legitimately thought was dead) has a smurf-pocalyptic vision that Clumsy Smurf (Anton Yelchin) inadvertently helps create. Clumsy, being, well, the clumsy one, smurfs up and leads the evil wizard right to Smurf Village. Through a series of events you don’t give a smurf about, six Smurfs—Papa, Clumsy, Smurfette (Katy Perry), Brainy (Fred Armisen), Grouchy (George Lopez), and Gutsy (Alan Cumming)—get sucked through a magical hole and wind up in New York City. There they meet Patrick Winslow (Neil Patrick Harris) and his pregnant wife Grace (Jayma Mays). Patrick is a middle-management type advertising exec at a cosmetics firm, and he has a chance to make it to the big time if only he can get this ad campaign done on time.
Posted by Unknown
Labels: Action, Animation, Comedy, Drama, Fantasy, Hollywood Movie, Sci-fi
Email ThisBlogThis!Share to TwitterShare to Facebook