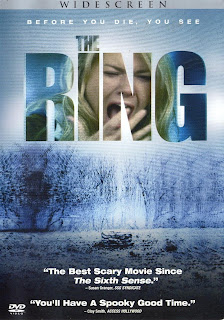 Description : Katie Embry (Amber Tamblyn) and her friend Becca (Rachael Bella) are bored at home. They discuss a supposedly cursed videotape; according to legend, those who watch the tape get a disturbing phone call and die seven days later. Katie reveals that seven days ago, she went to a cabin at Shelter Mountain Inn with her boyfriend, where she viewed the video tape. She then dies mysteriously, and Becca finds her distorted corpse, leading to Becca's institutionalization in a mental hospital.
Katie's cousin, Aidan Keller (David Dorfman), is visibly affected by her death. Katie's mother, Ruth (Lindsay Frost) asks her sister Rachel (Naomi Watts), Aidan's mother, a journalist, to investigate Katie's death, which leads her to the cabin where Katie watched the tape. Rachel finds and watches the tape; the phone rings, and she hears a child's voice say "seven days." The next day, Rachel calls Noah (Martin Henderson), her ex-boyfriend, to show him the video and asks for his assistance. He asks her to make a copy and she does.
After viewing the tape, Rachel begins experiencing nightmares, nosebleeds, and surreal situations. Anxious about getting to the origin of the tape, Rachel investigates images of the woman seen in the video. She traces the woman to a lighthouse located on Moesko Island. The woman is Anna Morgan (Shannon Cochran), who lived on the island many years prior with her husband Richard (Brian Cox). After bringing home an adopted daughter, tragedy befell the Morgan ranch – the horses they raised went mad and drowned themselves, which supposedly caused Anna, a horse-lover, to become depressed and commit suicide. Rachel is later horrified to discover that Aidan has watched the tape. Panicked, she calls Noah, revealing that Noah is Aidan's father.
Rachel goes to the Morgan house and finds Richard, who refuses to talk about the video or his daughter. A local doctor tells Rachel that Anna could not carry a baby and adopted a child named Samara (Daveigh Chase). Dr. Grasnik (Jane Alexander) recounts that Anna soon complained about gruesome visions that only happened when Samara was around, so both were sent to a mental institution. At the mental institution, Noah finds Anna's file and discovers that there was a video of Samara, but the video is missing. Back at the ranch, Rachel sneaks back to the Morgan house where she discovers a box containing the missing video. She watches it and is confronted by Richard, who claims that she and her son will die, and that there is nothing they can do. He then commits suicide in front of Rachel.
Rachel and Noah go to the barn and discover the attic where Samara was kept by her father. They also find a well in which Rachel discovers Samara's skeleton. She then sees a vision that shows that Anna pushed Samara into the well, and that Samara was alive when pushed--she survived in the well for seven days. Noah then informs Rachel that the time she should've been killed has passed, causing Rachel to believe that setting Samara free from the well broke the curse.
When Rachel informs Aidan that they will no longer be troubled by Samara, a horrified Aidan tells her mother that Samara "never sleeps" and that they were not supposed to help Samara, just as his nose begins bleeding. Noah is killed by Samara in his apartment, similarly to Katie. Rachel destroys and burns the original tape. Wondering why she had not died like the others, she remembers that she made a copy of the tape and realizes the only way to escape and save Aidan is to have him copy the tape and show it to someone else, continuing the cycle.

Thanks for watching The Ring 2002 Full Movie