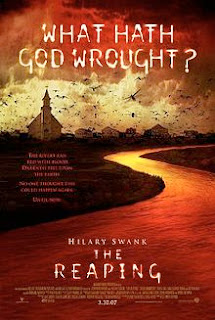 Description : Katherine Winter (Hilary Swank) and colleague, Ben (Idris Elba), investigate and disprove claims of miracles. In Louisiana, Katherine receives a call from a friend, Father Michael Costigan (Stephen Rea), who says that his photographs of her have developed burn marks that when assembled, form a sickle-like symbol, a possible warning from God, which she ignores. She then meets Doug Blackwell (David Morrissey), a teacher from the nearby town of Haven, asks Katherine to find out why Haven's river has turned red. The locals believe this is a biblical plague caused by a girl, Loren McConnell (AnnaSophia Robb), who they believe killed her older brother in the river. They travel to Haven where Katherine meets Loren and has a vision of her turning the river red. Meanwhile Ben witnesses dead frogs seemingly fall from the sky. Doug invites them to spend the night at his house, since the town doesn't have a motel. That night as they're about to eat dinner, they encounter flies and disease, which kills off local cows. Later that evening, Katherine explains to Doug at his wife's grave why she left the church; five years ago, she was an ordained minister. After a drought while doing missionary work in the Sudan with her husband and daughter, the locals sacrificed her family, believing they were the cause. Katherine and Doug then go back to the house, where they have sex.

Test results from the river prove it to contain human blood. The citizens meanwhile are shaving their children's hair, due to an outbreak of lice. Ben and Doug try to get the mayor to evacuate the town, but he and his staff are struck down with boils. The town then forms a mob, ready to kill Loren.

Katherine calls Father Costigan, who explains that he has researched a Satanic cult which sacrifices every second-born to create a child with "the eyes of the Devil" to bring them power. He also states that an angel, who cannot be harmed by the cult, will destroy them. He insists that Loren is the devil child, while Katherine is the angel. Suddenly, a supernatural force burns Costigan's room, killing him. Katherine goes to the McConnell house where she finds the cult's sacrificial chamber. There, she finds Loren's mother, who pulls out a gun and kills herself. Katherine grabs a knife and proceeds outside where a small group has gathered, including Ben and Doug. Suddenly, thousands of locusts appear, killing some of them. Doug runs away and falls in the river of blood, Katherine locks herself in the house, and Ben hides in a crypt, where he discovers skeletons and bodies of sacrificed children. He calls Katherine, when Loren appears outside.

Katherine hurries after Ben, but finds him dead. She confronts Loren as darkness falls and fireballs shoot from the sky. Katherine is about to kill Loren, when they share another vision. The cult, along with Doug, are shown trying to kill Loren, who was a second-born child. Loren escaped and her brother Brody stabbed her, but her wound miraculously healed, and Brody died. Katherine realizes that Loren is innocent and that she is the angel God sent. The townsfolk surround them as Doug tells her that God is protecting Loren, and only an ordained servant of God like Katherine can kill her. He explains that they invited Katherine to investigate the plagues because they hoped she would join them, since she had turned her back on God like they did. Katherine refuses, reminding them that they had sacrificed generations of second-borns, leaving a town of first-borns. Suddenly fire rains down on the town, killing everyone, including Doug.

Later, as Katherine and Loren drive away, Loren discloses to Katherine that Katherine is pregnant. As this is her second child, Katherine realizes that her son is the prophesied demonic child.

Thanks for watching The Reaping (2007 film) Full Movie