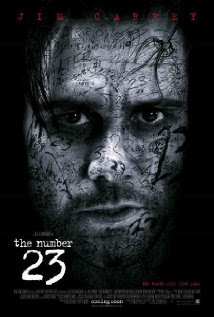 Description : Walter Sparrow (Jim Carrey) is an animal control officer married to Agatha (Virginia Madsen); they have a son, Robin (Logan Lerman). At a bookstore, Agatha begins looking at a book called "The Number 23" written by Topsy Kretts. She later gives Walter the book as a birthday present.
Walter starts reading the book, noticing odd similarities between himself and the main character, a detective who refers to himself as "Fingerling". Walter begins to have dreams of murdering Agatha. After one such dream he checks into a hotel where he stays up all night finishing the book, only to discover that it ends at chapter 22 with Fingerling about to commit suicide after murdering his lover.
The next day, Walter sees a dog which he had earlier tried to capture. It leads him to a cemetery and the grave of Laura Tollins (Rhona Mitra) a college student who had been murdered by her professor Kyle Flinch (Mark Pellegrino), with whom she was having an affair. The circumstances of Laura's murder mirror those of Fingerling's lover in the book. Walter thinks the professor wrote the book as a secret confession and goes to see him in jail. The man proclaims his innocence of the murder and of being the author, stating he would never choose a pen name like "Topsy Kretts," pointing out that it is an obvious homophone for "Top Secrets." Using A=1, B=2, C=3......Z=26, the dog's name, Ned, equals 14 + 5 + 4 = 23.
Upon discovering an address in the book, the family arranges a meeting with Topsy Kretts (Bud Cort), who, upon being confronted by Walter, becomes panicked, proclaims that Walter should be dead and slits his own throat. Inside the man's pockets, Agatha finds an ID card belonging to a mental institution, showing the man is Dr. Sirius Leary. She goes to the abandoned asylum and finds Walter's name on a box in Leary's office. Meanwhile, Robin and Walter discover that every 23rd word on every 23rd page of the book spells out two messages which lead them to "Casanova's Park." They arrive at the park late that night and go down a staircase marked "The Steps to Heaven" which consists of 23 steps. At the bottom, they dig deep in the ground and discover a human skeleton, presumably Laura Tollins, but when they return with a police officer, the bones have disappeared. Walter confronts Agatha about taking the bones and accuses her of writing the book. She admits to moving the skeleton to protect him, but tells Walter that it was he who wrote the book, and shows him the contents of the box from the Institute. In the box there is a manuscript of The Number 23 with Walter's name on it and an ankle bracelet that belonged to Laura Tollins.
He returns to the hotel to room 23, where he tears down the wallpaper and finds the missing 23rd chapter written all over the wall. The chapter explains that the story was Walter's confession and he remembers why he did everything: his father killed himself after the death of Walter's mother. His suicide note was just pages of things that added up to the number 23. Walter loved Laura Tollins and grew obsessed with 23 because of his father. Laura began sleeping with her professor. Walter tried to warn her about the number being dangerous and how it was going to come after her. She told him he was crazy, daring Walter to kill her. Walter went into a rage, stabbing her and burying her in the park, which the dog observed. The professor was the first to walk into the room where Laura was killed, and he picked up the knife, covering the weapon with his fingerprints and staining his hands with blood. With this evidence, he was convicted for the murder. Walter went to the hotel room, wrote The Number 23, placing the 23rd chapter on the walls, floor and every other part of the room, and then jumped off the balcony. He survived but suffered severe injuries and trauma. Walter ended up in the institute where Dr. Leary worked. Dr. Leary read the manuscript and, after publishing it, became obsessed with the number 23 himself. Because of the fall, Walter suffered memory loss and upon leaving the institute he met Agatha.
Agatha finds Walter at the hotel, and tries to assure him that he is no longer the person he was when he wrote the book. He insists that he is a killer, accepting the fact that he murdered Laura Tollins, and tells Agatha to leave before he kills her too. Agatha pushes a letter opener into Walter's hand, saying that if he is indeed a killer, he can easily kill again, and dares him to kill her. She tells him that she loves him. Walter tells her that she can't love him because no one can, mirroring an accusation made by Laura on the night of her murder. He leaves the hotel and runs into the street, where he nearly allows himself to be run over by a bus, but steps out of the way at the last minute when he realizes his son is watching. As he embraces his family, a voiceover by Walter tells the audience that he turned himself in to the police and is awaiting sentencing, having been told that the judge will likely go easy on him since he turned himself in. A funeral procession takes place in front of Laura Tollins's grave, where it is implied her body has finally been laid to rest, as Flinch observes, finally a free man.
At the end of the film, viewers can see the Bible reading from Numbers 32:23: "Be sure your sin will find you out."


Thanks for watching The Number 23 Full Movie