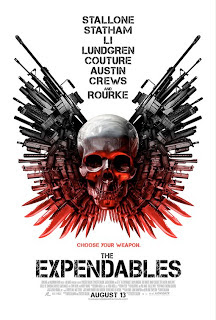 Description : A group of elite New Orleans-based mercenaries, called The Expendables, deploy to the Gulf of Aden to save hostages from a vessel seized by Somali pirates. The team consists of leader Barney Ross (Sylvester Stallone), former British SAS soldier and blade specialist Lee Christmas (Jason Statham), martial artist Yin Yang (Jet Li), sniper Gunner Jensen (Dolph Lundgren), weapons specialist Hale Caesar (Terry Crews) and demolitions expert Toll Road (Randy Couture). Against Ross’ orders, Jensen instigates a firefight and then tries hanging a pirate. When Yang intervenes, Jensen threatens his life, requiring Ross to subdue him. Though the team rescues the hostages, Ross discharges Jensen due to his psychological problems. At home, Christmas is upset to discover his girlfriend Lacy (Charisma Carpenter) has left him for another man, because he was not forthcoming about his work.

Ross and rival mercenary leader Trench Mauser (Arnold Schwarzenegger) visit a client called "Mr. Church" (Bruce Willis) for a mission, naming himself after their meeting venue. A busy Trench passes the contract to Ross, which is to overthrow dictator General Garza (David Zayas) in Vilena, a South American island in the Gulf of Mexico. Ross and Christmas fly to Vilena for initial undercover reconnaissance but are discovered after meeting their contact, Sandra (Gisele Itié), Garza's daughter. It is revealed that Ex-CIA officer James Munroe (Eric Roberts), with henchmen Dan Paine (Steve Austin) and Lawrence "The Brit" Sparks (Gary Daniels), keep Garza in power as a figurehead for their own profiteering operations. Ross causes casualties among the army as they escape Vilena, but Sandra refuses to leave her people suffer. Meanwhile, a vengeful Jensen joins Munroe's group and Garza is angered when Munroe has a captured Sandra waterboarded for information.

After finding that Lacy has been hit by her boyfriend, Christmas beats him and his friends, before reconciling with her, having revealed his work. Ross and the group discover that Mr. Church is a CIA operative and the real target is Munroe. Munroe went rogue to keep the drug money that funds the CIA to himself, while the CIA cannot kill one of their own directly due to bad publicity. Ross meets Expendables mission coordinator Tool (Mickey Rourke), who emotionally confesses about letting a woman commit suicide during the Bosnian War, instead of finding redemption by saving her. Ross is then motivated to go back for Sandra alone, but Yang accompanies him. Jensen and hired men pursue them on the road, ending in an abandoned warehouse, where Yang and Jensen fight a second time. Jensen attempts to impale Yang on a pipe, but Ross shoots him. A wounded Jensen makes amends and reveals the layout of Garza's palace. Ross boards the plane with Yang and finds the rest of the team, ready to aid him.

The team infiltrate Garza's compound. Thinking Munroe hired the Expendables to kill him, Garza has his soldiers' faces painted, ready for war. Christmas, Yang, Caesar, and Toll plant explosives throughout the site but Ross, while saving Sandra, is captured by the Brit and Paine. The team save him and kill the Brit, but are pinned down by Garza's men. Paine wrestles Ross but escapes when Caesar fights back with his AA-12 shotgun. Garza finally stands up to Munroe, ordering him out and returning his money. Instead, as Garza rallies his men against the American Expendables and Munroe that he believes to be the same, Munroe kills him and takes off with Paine and Sandra. Enraged, Garza's men furiously assault the team. However, the Expendables fight their way through, detonating the explosives, demolishing the palace and destroying the compound. Toll kills Paine by burning him alive while Ross and Caesar manage to destroy a helicopter before Munroe can use it to escape. Ross and Christmas then apprehend and kill Munroe, saving Sandra. Later, Ross gifts the mission payment to Sandra to restore Vilena.

The team travels back home and celebrate at Tool's tattoo parlor, with the recovering Jensen. Christmas and Tool have a game of knife throwing, before Christmas recites a limerick about him and throws a bullseye.


Thanks for watching The Expendables (2010 film) Full Movie