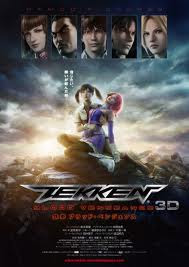 Description : The plot, which takes place in an alternate storyline between the events of Tekken 5 and Tekken 6, begins with Anna Williams setting up a decoy for her sister, Nina Williams, who is currently working with the new head of the Mishima Zaibatsu, Jin Kazama. Anna, on the other hand, works for Jin's father, Kazuya Mishima and its rival organization, G Corporation. Both are seeking information about a student named Shin Kamiya, and Anna dispatches a Chinese student, Ling Xiaoyu to act as a spy, while Jin sends humanoid robot Alisa Bosconovitch for a similar purpose.
During their investigation, Xiaoyu and Alisa form a friendship, unaware that the other is working for their enemy, although they are forced to turn against one another when Shin is captured by an unknown assailant. It is here that Alisa is revealed to be a cyborg - although Alisa believes she possesses human qualities after she spares Xiaoyu's life. After coming to terms with each other, Xiaoyu is abandoned by Anna and G Corporation, and the two girls flee from their previous organizations, taking refuge in their teacher, Lee Chaolan's mansion.
Xiaoyu and Alisa eventually discover genetic experiments had been done on Shin and his classmates, and believe that the Mishima family is seeking Shin, the sole survivor, and M gene subject, for his immortality. The pair discover that this had in fact, been an elaborate plan engineered by Heihachi Mishima, who used Shin to lure Kazuya and Jin and get the Devil Gene. After Heihachi disposes of Shin, he, Kazuya and Jin engaged in a triple threat brawl. During the fight, Kazuya and Jin become their devil forms. Ultimately, Jin is the victor, utilizing his devil powers. Heihachi then unleashes the ancient spirits of the Mokujins and a final fist burst by Alisa leaves Mokujin Heihachi open. Jin finishes him off, by an eye blast which slices it in half. Jin then leaves, telling Xiaoyu that he awaits a future challenge.
The film ends with Alisa and Xiaoyu back at their school's festival with the pair planning to enter the next King of Iron Fist Tournament.