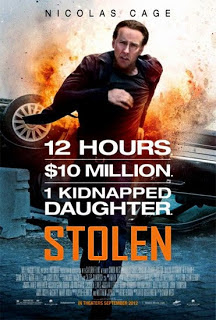 Description : The film opens as a drunk man stumbles through the darkened streets of New Orleans singing a song by The Hollies. When he leans into an empty doorway to urinate, he slowly realizes that he is peeing on someone's foot. It belongs to an FBI agent who is staking out a jewelry store under the command of Agent Tim Harland (Danny Huston). Harland is waiting for Will Montgomery (Nicolas Cage) and his crew to rob the store. Montgomery and his crew are busy a few blocks away, robbing a bank. Hoyt (M.C. Gainey) disables the alarm systems and Riley (Malin Åkerman) drives the getaway van. Montgomery and Vincent (Josh Lucas) go into the vault and steal $10 million in cash. Vincent sets his sights on pallets stacked with gold bars in the vault, but Montgomery convinces them that they are too heavy to steal.
The FBI realizes that the jewelry store is empty, and they quickly pick up the trail of Montgomery's crew. As the FBI close in, Montgomery and Vincent exit the bank and run into Raymond (Barry Shabaka Henley) in the alley. Vincent pistol whips him and prepares to shoot him, because he can identify them. Montgomery restrains Vincent by shooting him in the leg. He has to carry Vincent to the van and return to the alley for the money. Hoyt panics and drives the van away, leaving Montgomery to improvise his own escape. Montgomery is eventually cornered by Harland's team. Instead of being caught with the cash, which would add to his prison term, he burns it before surrendering.
Eight years later, Montgomery is released from prison and met by Harland and his deputy Fletcher (Mark Valley). They give Montgomery a ride to his daughter Alison's (Sami Gayle) house. The agents tell Montgomery that Vincent was killed, and they pepper him with questions about what he did with the stolen money. Montgomery insists that he burned it, but they do not believe him. As he meets with his daughter, she hands him a package that was delivered to her house that morning. They have coffee together, but she leaves abruptly for a counseling appointment to discuss her abandonment issues. She hails a cab, and Montgomery heads over to the bar where Riley now tends bar. As they catch up with each other, the package Allison gave him starts to ring. He opens it to find a BlackBerry, and the caller on the other end is Vincent. He is the cabbie who picked up Alison, and he threatens to hold her hostage until he gets his share of the money from the heist.
Vincent refuses to believe that Montgomery burned the money. He takes Alison to an abandoned warehouse, drugs her, soundproofs his trunk, and places her inside it. Montgomery goes to Harland's office to plead for his help. Harland does not believe his story and refuses to help. Fletcher and another agent escort Montgomery out of the building. Montgomery jumps them, steals their badges, and handcuffs them in the elevator. He uses their badges to access the FBI's computer and locate Hoyt's address.
Montgomery ambushes Hoyt as he comes home with his lunch. Hoyt confesses that he helped Vincent, but only because they both think that Montgomery hid the money from the heist. The FBI arrives as Hoyt and Montgomery struggle with each other, and they kill Hoyt as he brandishes a shotgun at them. Montgomery manages to track down Vincent's cab using the dispatcher's GPS, but Vincent has swapped out his medallion number and put his GPS system in the trunk of another cab. The FBI apprehend Montgomery, but he dislocates his thumb to escape from the handcuffs.
He decides that his only option is to steal the gold from the bank vault that he saw eight years ago. He and Riley enter the sewer and breach the vault from underneath with a thermal lance. Montgomery uses the lance to melt the gold down into the sewer water below. As it hardens, Riley places it into a bag. Riley then acts as a decoy to draw Harland away from Montgomery who goes to meet Vincent.
The meeting with Vincent quickly grows out of control, but Montgomery manages to kill Vincent and free Alison. In the end, Harland and Fletcher surveil Montgomery, Alison, and Riley as they have a cookout. Harland roots for Montgomery to throw the gold into the water and not try to sell it, which would require him to arrest Montgomery and send him back to prison. Montgomery knows he is being watched, and he throws a decoy into the water, fooling Harland.


Thanks for watching Stolen Full Movie