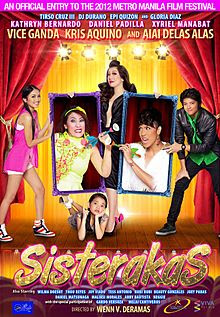 Description : Sisterakas is a 2012 Filipino comedy parody film produced by Star Cinema and Viva Films and selected as one of the eight official entries to the 2012 Metro Manila Film Festival. The film was released nationwide in theaters on December 25, 2012. The film was directed by Wenn V. Deramas and stars an ensemble cast including Ai-Ai Delas Alas, Vice Ganda, Kris Aquino, Kathryn Bernardo, Daniel Padilla, and Xyriel Manabat. The film broke box-office records in the Philippines upon its nationwide release in theaters. It now holds the title of the highest-grossing Filipino film of all time. The childhoods of Bernice (Vice Ganda) and Detty (Ai-Ai Delas Alas) were worlds apart, but they did have one thing in common: their father. Bernice's birth was the result of an infidelity on his behalf, however, and so while Detty grew up with a wealthy family, Bernice and his mother were left to fend for themselves.

Years later, Bernice has become a wealthy and successful businessman, the so-called "Lord of Apparels". But his abrasive personality and rudeness have led to the resignation of his 75th assistant. Detty, meanwhile, is in dire need of a job and applies for the newly vacated position as executive assistant to a man that, unbeknownst to her, is actually her half-brother. Bernice knows exactly who she is and hires her. For Detty, this job means she can take care of her daughters; for Bernice, it’s a chance for payback.

Meanwhile, the main rival of Bernice’s company is currently posing as very strong competition. Headed by the eccentric yet equally brilliant and talented Roselle (Kris Aquino), the competition gets tougher, and a string of events leads to the two company heads fighting over the once-expendable Detty.