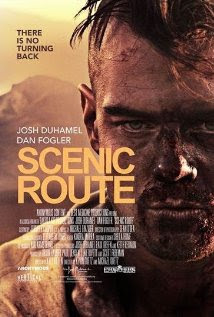 Description : Scenic Route is a 2013 American psychological thriller film written by Kyle Killen, directed bu Kevin and Michael Goetz, and starring Josh Duhamel and Dan Fogler. The film premiered at the 2013 South by Southwest Film Festival and was released on August 23, 2013. Mitchell and Carter are two old friends whose friendship is put to the test when they become stranded in the California desert. Tensions rise between lifelong friends Mitchell and Carter after their truck breaks down on an isolated desert road as they start to attack each other's life decisions with unwavering brutality.