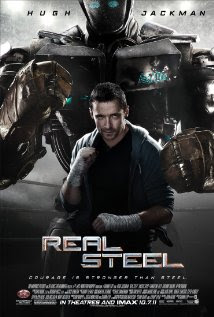 Description : Real Steel is a 2011 American science fiction sports drama film starring Hugh Jackman and Dakota Goyo, co-produced and directed by Shawn Levy and released by DreamWorks Studios through Disney's Touchstone Pictures label. The film is based in part on the 1956 short story "Steel" by Richard Matheson, though screenwriter John Gatins placed the film in U.S. state fairs and other "old-fashioned" Americana settings. Real Steel was in development for several years before production began on June 11, 2010. Filming took place primarily in the U.S. state of Michigan. Animatronic robots were built for the film, and motion capture technology was used to depict the brawling of computer-generated robots and animatronics. Real Steel was publicly released in Australia on October 6, 2011, and in the United States and Canada on October 7, 2011, to mixed reviews and grossed $295 million at the box office. The film was nominated for the Academy Award for Best Visual Effects at the 84th Academy Awards.