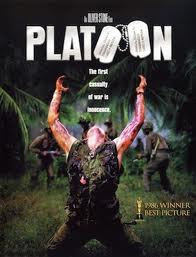 Description : Platoon is a 1986 American war film written and directed by Oliver Stone and stars Tom Berenger, Willem Dafoe and Charlie Sheen. It is the first film of a trilogy of Vietnam War films by Stone (followed by 1989's Born on the Fourth of July and 1993's Heaven & Earth). Stone wrote the story based upon his experiences as a U.S. infantryman in Vietnam to counter the vision of the war portrayed in John Wayne's The Green Berets.

In 1967, Chris Taylor (Charlie Sheen) has dropped out of college and volunteered for combat duty in Vietnam. Assigned to Bravo Company, 25th Infantry Division near the Cambodian border, he is worn down by the exhausting conditions and his enthusiasm for the war wanes. One night his unit is set upon by a group of North Vietnamese Army (NVA) soldiers, who retreat after a brief gunfight. New recruit Gardner is killed while another soldier, Tex, is maimed by friendly fire from a grenade thrown by Sergeant "Red" O'Neill (John C. McGinley), with Taylor being mistakenly reprimanded by the ruthless Staff Sergeant Bob Barnes (Tom Berenger). Taylor eventually gains acceptance from a tight-knit group in his unit who socialize and use drugs in a cabin clubhouse. He finds a mentor in Sergeant Elias (Willem Dafoe) as well as the elder King (Keith David) and becomes friends with Gator Lerner (Johnny Depp). The soldiers party in a room with Lerner, King, Elias, and Taylor, as well as two other soldiers, Manny and Rhah (Francesco Quinn).

During one patrol, Manny is found mutilated and tied to a post while two others, Sal and Sandy, are killed by a booby-trap. As tension mounts, the platoon soon reaches a nearby village where a supply cache is discovered. Taylor finds a disabled young man and an elderly woman hiding in a spider hole. Taylor snaps, screaming and threatening the man but is shocked to see Bunny (Kevin Dillon) then bludgeon him to death. Barnes interrogates the village chief to determine if they have been aiding the enemy making Lerner translate. Despite the villagers' adamant denials, with Lerner also telling him he is telling the truth, Barnes shoots and kills the chief's wife due to her persistent arguing, which Lerner disagrees with. Barnes takes the child of the woman at gunpoint, threatening to shoot her if the villagers do not reveal information. Elias arrives, scolds Barnes and engages in a scuffle with him over the incident. Platoon commander Lieutenant Wolfe (Mark Moses) orders the men to leave with the villagers and burn the village. As they leave, Taylor stops a group of soldiers from raping two girls.

Upon returning to base, Captain Harris (Dale Dye) warns that if he finds out that an illegal killing took place, a court-martial will be ordered, which concerns Barnes as Elias might testify against him. On their next patrol, the platoon is ambushed and pinned down in a firefight, in which numerous soldiers, including Lerner and Big Harold (Forest Whitaker) are wounded. Lerner is taken back to the helicopter landing area while Wolfe calls in a mortar strike on incorrect coordinates, resulting in friendly fire casualties. Elias takes Taylor and Rhah to intercept flanking enemy troops. Barnes orders the rest of the platoon to retreat, and goes back into the jungle to find Elias' group. Barnes finds Elias and shoots him, returning to tell the others that Elias was killed by the enemy. While they are leaving, Lerner dies, and after they take off, a wounded Elias emerges from the jungle, running from a group of North Vietnamese soldiers. Taylor glances over at Barnes and reads the apprehension on his face as Elias dies. At the base, Taylor attempts to talk his group into retaliation when a drunken Barnes enters the room and taunts them. Taylor attacks him but is cut near his eye as a result.

The platoon is sent back into the combat area to maintain defensive positions. King is sent home and Taylor shares a foxhole with Francis (Corey Glover). That night, an NVA assault occurs and the defensive lines are broken. Several soldiers in the platoon including Junior, Bunny and Wolfe, are killed, while O'Neill barely escapes death by hiding under a dead soldier. To make matters worse, an NVA sapper armed with explosives rushes into battalion HQ, self-detonating and killing everyone inside. Meanwhile, Captain Harris orders his air support to expend all remaining ordnance inside his perimeter. During the chaos, Taylor encounters Barnes, but the wounded sergeant attacks him. Just before Barnes can pummel Taylor, both men are knocked unconscious by an air strike on the overrun base. Taylor regains consciousness the following morning, picks up an enemy Type 56, and finds an injured Barnes, who dares him to pull the trigger. Taylor shoots Barnes, killing him. Taylor then sits, contemplating suicide until reinforcements arrive and find him.

Francis, who survived the battle unharmed, deliberately stabs himself in the leg and reminds Taylor that because they have been twice wounded, they can return home. Taylor encounters his and Elias' old friend Rhah one last time, apparently unscathed and returning with American Armor Cavalry, Rhah then bids them farewell with a battle cry. O'Neill, who desperately wants to go home, is given a promotion to platoon leader and is told he will remain in duty and replace Barnes. The helicopter flies away and Taylor weeps after he stares down at multiple craters full of corpses, friend and foe alike.