Injoy! Watching Free Movies
Description : Bong (Vhong Navarro) has liked Winona (Toni Gonzaga) since time immemorial but he never had the courage to pursue her. Winona on the other hand, seems to be also showing interest in Bong, but he is too insensible to notice this. One day, in the tenement Bong is managing for his Aunt Lolit, he receives the final notes from the recently deceased neighborhood Doctor. Panying, Doc’s assistant, hands Bong his result and asks Bong to just hand out Winona’s. He checks out his letter and sees that the results are all negative. Bong is very healthy. However, as he opens Winona’s envelope, fear drowns him because he knows about the so-called curse that all the women in Winona’s family die before 25. Her mother died after giving birth at the age of 24, her older brother died of bangunot at age 21, her maternal aunt disappeared during Martial Law at 23, her grandmother died during World War II at age 20, her great grandmother is said that she died of drowning at age 18, her greatest grandmother died of malaria at age 22, he ancestor was devoured by a dinosaur at age 19. Bong is aware that Winona is turning 25 soon and this letter might just confirm that curse. He opens the letter and sees the result. It is positive. Winona has lupus and she will die soon. Bong vows to make Winona’s last remaining days happy and perfect. Bong goes through the whole montage of making life blissful for Winona. Winona and Bong become a lot closer to each other. They begin to fall in love. When Winona turned 25, she didn’t die. She found the letter sent by the hospital. She discovers then that her results were all negative. Bong finds out about the good news, he is thrilled. So whose results did Bong find? Who was the real person with lupus? After the party of Winona, she decides to tell Bong how she feels about him. However, as she starts to tell Bong, he faints. Eventually, he learns that he is the one with lupus. He finds out that the Doctor’s assistant made a mistake with his notes. He felt devastated. However, Bong is determined not to tell Winona. He’s not confident to love Winona anymore since he will die soon. Winona and Bong started to fight and drift apart. Winona felt neglected and unloved. Winona meets her old time crush. Bong feels jealous of this. He realizes that he wants to spend the rest of his remaining days loving Winona. Bong tries to win her back. Will Winona accept his love? Is there still chance for a happy ending for the two? Keywords : Watch movie online | Watch My Only U 2008 online | Online movies | Movies free My Only U 2008 | My Only U 2008 online movie | Watch free movie online | Watch My Only U 2008 online movies | Free Tagalog Movie | Pinoy Movies | Asian Movies | Hollywood Movies | War Movies | Animated Movies | Bollywood Movies | Tagalog movie online | Watch free tagalog movie online Thanks for watching My Only U 2008 Full Movie 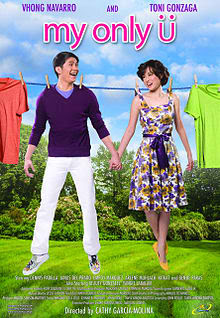