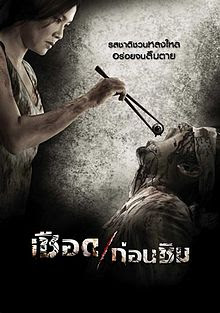 Description : Buss (Mai Charoenpura) is a disturbed woman who hears voices in her head is tormented by visions. Having been taught some pretty dubious and unconventional food preparation and cooking skills by her mother, she decides to open up a noodle stall, using the body of a man left over from a riot as the main ingredient. Soon enough, the customers are turning up in droves for her delicious meals, and life is starting to look good after a nice young man takes an interest in her. However, her past comes back to haunt her, and as her mental state breaks down, yet more people end up on the chopping block or hanging up on meat hooks in her basement.

The film also tackles the themes of mental illness and the mistreatment of women, with Buss' behavior being depicted as being part of an ongoing cycle of violence that she suffered as a child, and which she is now passing on to her own daughter.