Injoy! Watching Free Movies
Description : Three years after the first Kimmy Dora: Kambal sa Kiyeme movie, we finally get another glimpse on the posh and outlandish life of twins Kimmy and Dora Go Dong Hae via director Joyce Bernal’s sequel Kimmy Dora and the Temple of Kiyeme. In this sequel, the Go Dong Haes have been living a successful albeit controversial life. Kimmy now owns an airline company and a hospital among other things, and things are going great for her and her farmer boyfriend Barry from the province. Dora, on the other hand, gets to take bigger responsibilities as well such as being the designer to her sister’s events and her relationship with Johnson on a good turn as well. Tables turned when a historic family secret involving their father’s past was revealed. The story includes elements of horror and comedy which at times, tends to work well while on some parts falls flat. The last part of the movie even included some action scenes in it which makes the movie more over the top than ever. The script was consistent though; it gave some references to the first movie while being consistent with the transition to this second film. I also figured out how they knew what the firs movie’s strengths were and worked on its advantage on this second one. The technical aspects of the film were outstanding; the sound was polished while the costumes were very interesting and supports the character build up of both Kimmy and Dora. What I love the most though is the production design of the film; they knew how to make use of both constructed sets and work on built ones. Whether it’s the scenes from Korea, the Go Dong Hae household, the airplane, or the museum, it all built a mark on the viewer’s impression. While the technical aspects of the film helped the overall outcome of the movie, it cannot be denied that the primary strength is indeed with the acting. Eugene Domingo is still as effective as ever when playing Kimmy and Dora Go Dong Hae. She already knew the perfect treatment to the two characters well enough that the shift from Kimmy to Dora and vice versa was impeccable, and I see no one touching her in that aspect. With that said, the supporting characters were not merely supporting players as they held their own in the movie. I specifically noticed how Ariel Ureta enjoyed doing his character so much that his chemistry with Domingo (as his daughters) is palpable enough that he did not look stiff and instead went with the flow of the movie. The same can be said about Miriam Quiambao’s Gertrude (who was effortlessly funny) and Moi’s Yaya Elena (who cracks you up with her delivery). Then, there’s Mura who was as ridiculous as one can get and a definite scene-stealer from the moment that she appeared. And of course, when looking at the credits, there’s a bazillion miss or you’ll blink it cameo appearances that I’ll even search some of them when I re-watch the film again. Overall, while this was highly entertaining on its own, this falls into the usual clump of originals being better than the sequel. Had the movie focused on the comedic aspect, I think it could have come up with an overall better film. Nevertheless, it was a worthy and enjoyable follow up. Keywords : Watch movie online | Watch Kimmy Dora Temple Of Kiyeme 2012online | Online movies | Movies free Kimmy Dora Temple Of Kiyeme 2012| Kimmy Dora Temple Of Kiyeme 2012online movie | Watch free movie online | Watch Kimmy Dora Temple Of Kiyeme 2012online movies | Free Tagalog Movie | Pinoy Movies | Asian Movies | Hollywood Movies | War Movies | Animated Movies | Bollywood Movies | Tagalog movie online | Watch free tagalog movie online Thanks for watching Kimmy Dora Temple Of Kiyeme 2012 Full Movie 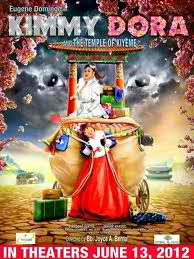