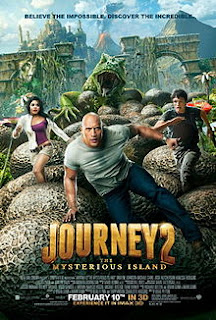 Journey 2: The Mysterious Island was released on February 10, 2012 to mixed reviews, but became a box office success with a worldwide gross of nearly $326 million, surpassing its predecessor.

It's been four years since the events of the first movie. 18-year-old Sean Anderson (Josh Hutcherson) is caught by the police after a brief chase on his dirtbike which ended with him driving into a swimming pool while trying to evade them. Minutes later, his stepfather Hank (Dwayne Johnson) arrives where a police officer (Stephen Caudill) who is friends with Hank tells him that Sean had broken into a satellite research center. The police officer also tells Hank that he has convinced the owners of the swimming pool not to press charges. Hank takes Sean home where his mother Elizabeth(Liz) (Kristin Davis) is not pleased with his actions, or the fact that he and Hank do not get along well.

Hank discovers that Sean had broken into a satellite research center in order to boost the signal of a code he'd received by someone he suspects is Alexander Anderson, Sean's grandfather who had been missing for two years. Wanting to bond with his stepson the next day, Hank helps Sean decipher the code of Jules Verne characters which lead to three books: Treasure Island, Gulliver's Travels, and Verne's own Mysterious Island. Using the book's individual island maps, Hank suspects they are books of the same island and uses a back light in order to make them all one completed land mass with the coordinates to its location. Hank manages to convince Liz to let the both of them go in search of the island.

They arrive in Palau where their need of transportation to this dangerous part of the ocean attracts an Palauan helicopter tourism guide Gabato (Luis Guzman) and his daughter Kailani (Vanessa Hudgens) who Sean develops an immediate crush on. They agree to fly them out to the island for $3,000, but the helicopter gets caught in a Category 5 hurricane and they crash into the Pacific, waking up on the island.

Crossing into the island, they discover one of the laws of the Mysterious Island that all animals big are small and all animals small are gigantic (inspiring Gulliver's Travels). The crew find tiny elephants and giant butterflies which are their first creatures to discover on the island. The group decided to explore further into the island.

After coming across a massive frill-necked lizard when they come across her egg clutch, they are rescued by Alexander (Michael Caine) who takes them to a large hut he'd built from the wreckage of the ship that brought him to the island, the Blue-Eyed Lucy. He has a radio, but due to the positioning of the communications satellite it would be two weeks before they could call for help.

The next morning, Alexander leads the group to the lost city of Atlantis which is usually submerged into the ocean, and he had calculated that the island sinks once every 70 years. However, the evidence that Hank sees leads him to prove that the calculations are wrong and the island will sink in a couple of days. Their only means of salvation seems to be the legendary Nautilus (Captain Nemo's submarine) hidden somewhere on the island. Kailani enters Nemo's crypt and finds his journal, which has the whereabouts of the ship just off one of the coasts in a cave. They decided to go to that cave through the heart of the island.

They mount giant bees in order to fly over a high ridge and make up time, but encounter large birds that try to devour the bees. After saving Kailani's life, Sean crashes and dislocates his ankle. Hank and Alexander later patch up Sean's ankle the best they can.

The next morning, the water has risen exponentially and Hank deduces that the island will sink in a matter of hours, not days. Gabato is missing, having gone toward the island's golden volcano (which was the inspiration for Treasure Island) in search for the funds to give his daughter a better life. While Alexander and Kailani go after him, Sean and Hank head for the coast to look for the Nautilus.

Due to the water rising, Sean and Hank make makeshift oxygen tanks and dive down fifty feet in order to obtain the Nautilus and are nearly killed by a giant electric eel. They are unable to power the ship however because the vessel's batteries being 140 years old have run down. They find a way to power the submarine from the electric eel.

Meanwhile, Kailani and Alexander find Gabato and convince him to escape with them instead of trying for the golden volcano. They head toward the shore as the island begins to suddenly and violently rip itself apart. The golden volcano starts to erupt violently, pouring lava flows all over the area. Highly flammable lava bombs are thrown from the golden volcano into the air and suddenly land on the sinking island's debris. Sean and Hank use a harpoon to get an electrical jump start from the eel swarming around them and they are able to power the machine, just in time to pick up the others who had fallen into the water. Gabato pilots the submarine out of harm's way while Hank and Sean fire torpedoes into the path of falling island debris. As they clear the danger, Alexander finally calls Hank by his preferred name, as up to that point he only called him "Henry" and the family makes up. And Kailani finally kisses Sean for his bravery.

Six months later, Kailani and Gabato are well off, Gabato now running the most popular tourist attraction on Palau, providing tours aboard the Nautilus, and Kailani is attending college. Kailani goes to visit Sean on his birthday. While they are celebrating, Alexander shows up with a book for Sean's birthday present. Sean opens it to find Verne's From the Earth to the Moon, Alexander's suggestion for the next adventure to which Liz protests. Hank replies "What could possibly go wrong? It's only the moon!"

During the credits, the mini-elephants from the earlier scene are seen underwater swimming over Atlantis.


Thanks for watching Journey 2: The Mysterious Island (2012 film) Full Movie