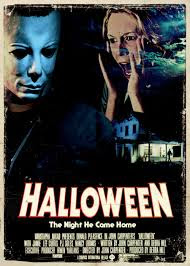 Description : On Halloween night, 1963, in Haddonfield, Illinois, 6-year-old Michael Myers (Will Sandin) murders his older teenage sister Judith Myers (Sandy Johnson), stabbing her repeatedly with a butcher knife after she had sex with her boyfriend (David Kyle). Fifteen years later, on October 30, 1978, Michael escapes the hospital in Smith's Grove, Illinois where he had been committed since the murder, stealing the car that was to take him to a court hearing, the intention of which was for him to never be released. The following day – Halloween – in Haddonfield, high school student Laurie Strode (Jamie Lee Curtis) is stalked by Michael, who is now dressed in blue coveralls and a white mask, appearing outside her class window and driving past her on the street. Informing her friends, Annie (Nancy Kyes) and Lynda (P. J. Soles), they dismiss her concerns. Later at her house, Laurie becomes startled and unnerved to see Michael outside in the yard staring into her room. Meanwhile, Michael's primary psychiatrist, Dr. Samuel Loomis (Donald Pleasence), anticipated Michael's return home and goes to the local cemetery, finding that Judith Myers' headstone is missing. Later on, Loomis approaches Annie's father, Sheriff Leigh Brackett (Charles Cyphers), and the two quietly look for Michael. That night, Laurie babysits a boy named Tommy Doyle (Brian Andrews), while Annie babysits a girl named Lindsey Wallace (Kyle Richards) across the street from the Doyle house. When Annie gets a call from her boyfriend, Paul, to pick him up, she takes Lindsey to the Doyle house. Annie gets in her car to pick up Paul but has her throat slashed by Michael, who was hiding in the backseat of her car. At the Doyle house, while he plays hide-and-seek with Lindsay, Tommy spots Michael carrying Annie's body and tries to tell Laurie, who doesn't believe in any "boogeyman" that Tommy says he saw. Later, Lynda and her boyfriend, Bob, enter the Wallace house and head to the bedroom, where they have sex. While downstairs to get a beer for Lynda, Michael impales Bob on the wall with a kitchen knife and heads upstairs pretending to be Bob in ghost attire. Gaining no response from him, Lynda suspects something is wrong and calls Laurie, just as Michael strangles her with the telephone cord. Feeling unsettled, Laurie puts the kids to bed and heads over to the Wallace house, only to find Annie's body with Judith Myers' missing headstone and Lynda and Bob dead nearby. Suddenly, Laurie is attacked by Michael and falls backwards down the staircase. Fleeing the house, she screams for help, but to no avail. Running back to the Doyle house, she realizes she lost the keys and the door is locked, as she sees Michael approaching in the distance. Laurie panics and screams for Tommy to wake up and open the door quickly. Luckily, Tommy opens the door in time and lets Laurie inside. Laurie instructs the children to hide and then realizes the phone line is dead and that Michael has gotten into the house through a window. As she sits down in horror next to the couch, Michael appears and tries to stab her, but she counterattacks his move, stabbing him in the side of his neck with a lingering knitting needle. Believing he's dead, Laurie goes upstairs telling Tommy and Lindsey she killed the "boogeyman", but Michael reappears in pursuit of her. Ordering the kids to hide and lock themselves in the bathroom, Laurie opens a window to feign escape and hides in a bedroom closet. Not gullible, Michael tears a hole in the closet door to get to her. However, Laurie frantically undoes a clothes hanger to stick Michael in the eye, causing him to drop his knife which Laurie obtains to stab him. Michael collapses and Laurie exits the closet carefully before urging the kids to go call for help. Dr. Loomis sees Tommy and Lindsey running away from the house and suspects Michael could be inside. Back inside, Michael gets up and tries to strangle Laurie, but Dr. Loomis arrives in time to save her and shoot Michael in the head, then five more times in the chest for a total of six shots. Michael falls from the second-story patio onto the lawn below. Laurie asks Loomis if that was the "boogeyman", to which Loomis says it was. When Dr. Loomis looks over the balcony, he finds Michael's body is missing. With Laurie sobbing and Loomis gazing into the night, the movie ends speculating Michael could be anywhere, with the sound of Michael's heavy breathing in the background. Keywords : Watch movie online | Watch Halloween (1978) online | Online movies | Movies free Halloween (1978) | Halloween (1978) online movie | Watch free movie online | Watch Halloween (1978) online movies | Free Tagalog Movie | Pinoy Movies | Asian Movies | Hollywood Movies | War Movies | Animated Movies | Bollywood Movies | Tagalog movie online | Watch free tagalog movie online Thanks for watching Halloween (1978) Full Movie
Posted by Unknown
Labels: Crime, Hollywood Movie, Horror, Suspense, Thriller
Email ThisBlogThis!Share to TwitterShare to Facebook