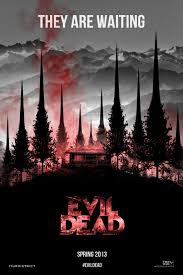 Description : After being captured in the woods, an injured girl (Phoenix Connolly) is restrained in a basement with many people present. Upon revealing she is demonically possessed, her father, Harold (Jim McLarty), sets her on fire and shoots her dead.

Some time later, Mia (Jane Levy), her brother David (Shiloh Fernandez), their friends Eric (Lou Taylor Pucci), and Olivia (Jessica Lucas), and David's girlfriend, Natalie (Elizabeth Blackmore), arrive at an old, remote cabin in the woods where they plan to help Mia recover from heroin addiction. A foul stench leads them to the cellar, where they discover rotting animal corpses, a double-barreled shotgun and a book titled Naturom Demonto, a Sumerian variation of the Book of the Dead. Ignoring warnings scrawled on the book's pages, Eric reads a passage aloud, summoning a demon which enters Mia's body.

Terrified, Mia pleads to leave, but the group refuses, believing she’s suffering from withdrawal. She takes the group's station wagon and heads out on her own, but a sudden apparition of the girl from the prologue startles Mia, causing her to steer into a flooded ditch which disables the car. Returning to the cabin on foot, she gets entangled in a cluster of vines that become animate and rape her. Mia makes it back to the cabin, visibly shaken, and tells David that whatever attacked her in the woods is in the cabin with them, but he doesn't believe her. Shortly afterward, David walks in on her scalding herself in the shower, which Eric recognizes is prophesied in the book. David takes his Jeep to drive her to a hospital, but flood waters block the road. After returning to the cabin, the now fully possessed Mia attacks both Olivia and David before passing out. The group locks her in the cellar to contain her.

The demon then possesses Olivia, forcing her to mutilate her face with broken shards of the bathroom mirror and attack Eric, who kills her in the ensuing struggle. While David tends to Eric's wounds in a shed next to the cabin, a crying Mia lures Natalie into the cellar and bites her hand before Natalie realizes her mistake and flees back upstairs. Eric does some research in the book, and learns that it prophesies a demon called the Taker of Souls will consume five souls, unleashing a being called the Abomination. Meanwhile in the kitchen, the demonic bite is causing Natalie's arm to rot away, leading her to sever it with an electric knife. David and Eric return and tend to Natalie's wounds, then discuss their next move. Eric explains that Mia must be "purified" via burning, live burial or dismemberment. Suddenly, a possessed Natalie attacks them with a nail gun and a crowbar. David blows off Natalie's other arm with the shotgun, and the demon leaves her body as she bleeds to death.

Coming up with a plan, David and Eric enter the cellar and are attacked by Mia, who heavily injures Eric before David knocks her unconscious with tranquilizers. He then takes her outside and buries her alive in a shallow grave next to the cabin. After she dies, he digs her up and uses an improvised defibrillator to revive her; the demon has been exorcised and she is human again. Returning to the cabin to get the keys to his Jeep, David is attacked by Eric, who is now possessed. David locks Mia out of the cabin, engaging Eric by himself. Eric taunts David about the Abomination's imminent arrival. David responds by using the shotgun to ignite a nearby gasoline can, engulfing the cabin in flames and killing them both.

Since five souls have now technically been taken, the prophecy has been fulfilled. Blood rains from the sky as the Abomination is summoned, crawling out of the ground and chasing Mia. After a protracted showdown, Mia manages to kill the Abomination by decapitating it with a chainsaw. The blood rain stops and a shell-shocked Mia walks away into the forest. The Naturom Demonto lies on the ground nearby, unscathed by the cabin fire.

During the credits, Professor Raymond Knowby recalls his past discovery of the Naturom Demonto. In a post-credits scene, an older Ash Williams (Bruce Campbell) appears in a dim spotlight and says his iconic line from Evil Dead II and Army of Darkness, "Groovy", before turning to the audience.