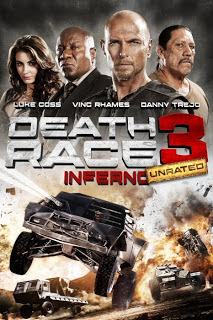 Description : Death Race 3: Inferno (also called Death Race 3 and Death Race: Inferno) is an action film sequel to Death Race 2 that was released as straight to video on January 22, 2013. Region 2 DVD released on 4 February 2013 in the United Kingdom. Frankenstein has won four of his races and needs to win one more to win his freedom. Before his final race, Lucas and his team, car and all, are transferred to another prison where they will compete in a Death Race in the desert. Also, at the same time, Ceaser runs into a marketer who wants to franchise the Death Race program.