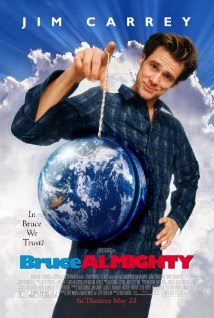 Description : Bruce Almighty is a 2003 American fantasy comedy film directed by Tom Shadyac and written by Steve Koren, Mark O'Keefe and Steve Oedekerk. It stars Jim Carrey as Bruce Nolan, a down-on-his-luck TV reporter who complains to God that he isn't doing his job correctly, and is then offered the chance to try being God himself for one week. Morgan Freeman, Jennifer Aniston, Steve Carell, Catherine Bell, Lisa Ann Walter, and Philip Baker Hall also star, while Tony Bennett makes a cameo appearance.

This is Shadyac and Carrey's third collaboration after working together on Shadyac's first film, Ace Ventura, Pet Detective, which also launched Carrey's career, and Liar Liar.

When released in American theaters in May 2003, it took the #1 spot at the box office, grossing $85.89 million - higher than the release of Pearl Harbor, making it the highest-rated Memorial Day weekend opening of any film in motion picture history (until the release of X-Men: The Last Stand in 2006). The movie surprised media analysts when it beat The Matrix Reloaded after its first week of release. By the time it left theaters, it took in a United States domestic total of over $242 million and $484 million worldwide. The film has gone on to become a cult film.