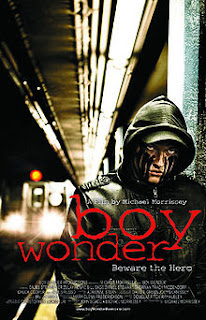 Description : Boy Wonder is a 2010 American drama and psychological-thriller about vigilantism.

A young boy named Sean Donovan lives with his mother and abusive alcoholic father. His family is attacked in their car one night, resulting in the death of his mother. Afterward, his father, Terry (Bill Sage) moves them to a nicer neighborhood.

Years later, Sean (Caleb Steinmeyer) is an excellent student, but has become antisocial, and he sees abuse in everyday arguments. He trains as a boxer and carries weapons at night as a vigilante. He kills an assaulter in an attempted mugging, and an eyewitness account garners the attention of Teresa Ames (Zulay Henao) who had recently been promoted to the homicide division of the NYPD. She investigates Sean who frequents the police station, secretly searching for information on his mother's killer, learning about his life and that he is fluent in other languages such as Chinese after he angrily berates a restaurant staff for insulting Teresa and other customers in their language. Sean defends a young woman being violently abused by her pimp and strikes him with a baton before shooting him.

While riding the train, Sean encounters a homeless man verbally harassing a Chinese family and the passengers of the train. He tells the family to leave the car before putting on face paint and brutally beating the man with brass knuckles. Teresa and her partner, who happen to be on the train, go to investigate, but Sean eludes them. Learning that the perpetrator spoke fluent Chinese, she suspects it's Sean. Her supervisor tells her not to investigate Sean, but she persists. Finally, a retiring detective tells Teresa that the young Sean was able to clearly identify his mother's assailant from a photo book, but that Terry convinced him to withdraw his statement.

During a school party, Sean has an episodic memory recall where he remembers his mother's attacker calling his father by his old boxing nickname. Teresa finds a picture of Terry and the assailant as they knew each other before the attack. Sean assumes that Terry had staged the attack in order to collect his mother's life insurance money. Sean confronts his father, but Terry adamantly denies this. Sure of his guilt, Sean shoots and kills Terry. Teresa tracks Sean down who states someone broke into their home and killed his father, but when she decides to look the other way and disposes of the evidence the audience is left to infer she knows Sean killed his father.

Sometime later, Sean sends a letter to the man who killed his mother, Larry Childs (James Russo), who is currently serving 2 years on a plea bargain deal for another case. Enclosed with the letter is a return envelope and two stamps: a black one to indicate his father's guilt, or a red one to indicate his father's innocence. Moments after placing the stamp on the envelope, Childs dies in agony from poison that Sean placed on the envelope seal. When Sean receives the return envelope, he sees that it is stamped with a red stamp.